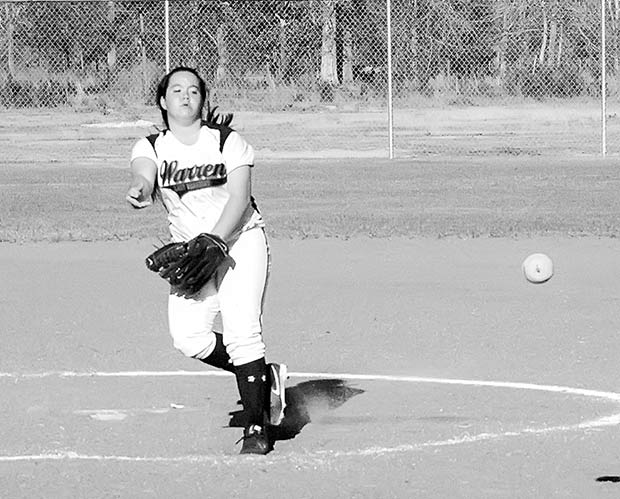 The Lady Warriors varsity softball team of Warren High School played against the Kountze Lionettes on March 15. Kountze put up an impressive fight, but Warren ultimately took this victory.

The first inning began with sophomore Chelsea Hammons pitching and senior Josie Walters catching. Despite a stellar performance from the duo, the Lionettes managed to score once. The Lady Warriors retaliated with players Aleisha McNulty, Brandi Hamilton, and Hammons all hitting themselves onto a base. McNulty was able to make it to home plate before the close of the inning.

Hammons closed out Kountze in the second inning, refusing to admit any players onto first base. After three strikeouts, Warren came up to bat. First hitter Bergandie Conner's walk preceded two outs, though, after stealing a base, she was able to run home due to a strong hit from McNulty.

A substitution came in the third inning, as Conner assumed the role of catcher, temporarily. After a hit from a Lionette, a triple hit allowed a player to run into home, tying the score at 2-2. A pop hit caught by senior Kaylon Morvant ended Kountze's hitting session. Warren was met with ease when attempting to advance onto base, as players Brandi Hamilton, Morvant, and Conner were all walked. After Walters was also walked, Hamilton was forced to home, adding another point for the Lady Warriors. Morvant utilized her swift movement to steal home plate, prior to the close of the third inning, ending it at 4-2.

Walters had returned to her position of catcher for the fourth inning. After the Lionettes had one out, a double play from the Lady Warriors closed out any opportunity for their opponents to catch up in this inning. The Lady Warriors then took advantage of this chance to expand their lead. After Karli Welch and Morvant were walked and Hammons hit her way onto first base, Conner was also walked, forcing Welch home. Hammons sprinted home, stealing a base right before her team reached their third out.

Hammons struck out the first Lionette that she faced; however, the next batter earned a favorable outcome, hitting herself onto base. Despite this, the Lady Warriors gave their opponents a second out, by tagging the player at home plate. Kountze did manage to get a player home, though, putting the score at 6-3. The Lady Warriors sealed their victory at the bottom of the fifth inning, as a total of seven players were walked and two players hit onto a base. The team scored seven points in this inning, putting the final score at 13-3. The team will play again on March 26 at Deweyville. The boys' varsity baseball team will play on March 22 at Hemphill.