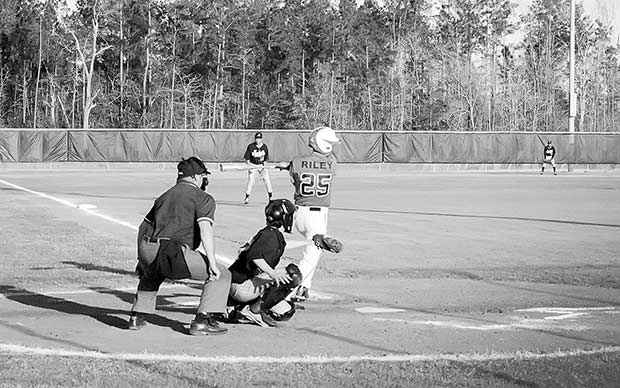 JV player Dylan Riley swings at the baseball during their game against Alto. (Mitchell McCluskey Photo)

The varsity boys' baseball team of Warren High School has had an overwhelmingly successful season, so far. The team currently is playing on a streak of four consecutive victories and holds a record of ten wins and only three losses.

On March 5, the team faced the Alto Hornets in a game which yielded another spectacular win for the team. The game initially began in the Warriors favor, as the team scored four points within the first inning, in contrast to the Hornets remaining scoreless until they managed to slip in two points in the final seventh inning. The junior varsity boys' team also played against the Alto Hornets on March 5 at home. The team was met with much success, with sophomores Dylan Scherry pitching and Tate Gore catching. The team ultimately won the game with twice the amount of points of their opponents, at 10-5.

The Warriors then played against Caldwell on March 7 in a tournament hosted by Hempstead. This game also proved the team's ability to play collectively and consistently, for they undeniably conquered their opponents in an admirable 10-0 game. The Warriors continued to impress at the Hempstead tournament, and after winning another game 11-0, the team played against Iola on March 9. Though Iola led for a brief time as the game commenced, by the end of the second inning, Warren tied the game up. After an outstanding fifth inning, in which the Warriors scored nine points, the team was deemed impenetrable and finished another successful game with the score at 16-5. The team's next game will be against Beaumont Legacy on March 15. On March 19, the Warriors will play their first district game, which will be against Newton. The junior varsity team will play against Newton on March 16.