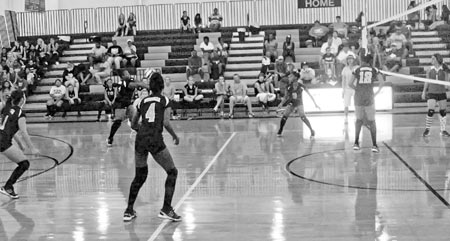 The Lady Eagles opened the 2012 volleyball season against the 3A Jasper Bulldogs in Jasper. Jasper jumped out quickly and won game one 25-11. The Eagles kept it closer in game two but fell short 25-19. The Lady Eagles started to rally in game 3 winning 25-21. The momentum carried to game four as Woodville evened the match at two games to two with a 25-17 win. Jasper would win game five 15-10 to win the match. Kali Davis led the Lady Eagles with seven aces followed by Mallory Watt's two. T'Kenah Barlow and Makala Kibble each had five kills. Davis was third on the team with three. Hallie Beatty and Katie Watts were the team leaders in assists with three apiece. Shawnacy Williams hustled out four digs for the Lady Eagles. Both the freshmen and JV walked away with victories on opening night. The freshmen led everything off by winning 25-19 and 25-18 in straight sets. The junior varsity had to comeback after dropping game one to Jasper 21-25. Woodville won the next two sets 27-25 and 25-19. The Lady Eagles will be busy next week. The varsity will be playing in the Buna tournament Thursday and Saturday. On Friday, all three teams will head to Huntington. The freshmen will play at 4:30, followed by the JV at 5:30, and the varsity at 6:30. On Tuesday, August 28, the Lady Eagles will play their home opener against Buna. The freshman will begin at 4:00, followed by the JV at 5:00, and the varsity at 6:00.

The Woodville Eagles took the field for the first time last Friday at Eagle Stadium. The Eagles participated in a three way scrimmage against Huntington and Hemphill. According to Steve Fentress, "Overall it wasn't a bad night. There were some bright spots on both sides of the ball. We still need to correct some mistakes to be where we want to be by August 31. Penalties are number one on the list." The Eagles have one more scrimmage before they open the year against New Waverly. The Eagles will host Bridge City on Thursday, August 23 here at Eagle Stadium. The JV will play at 6:00 followed by the varsity at 7:15.