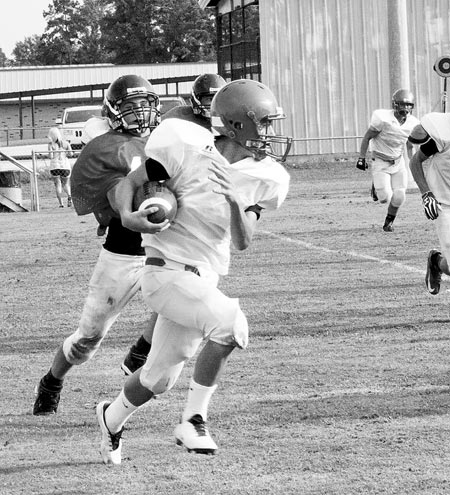 Last season, the West Sabine Tigers lit up the Bulldogs for 60 points in what would be the beginning of a 0-4 district record, and a season to forget. On Friday night, the Bulldogs were given a chance to redeem themselves under new defensive coordinator, Coach Paul Veirs.

The Bulldogs were able to get in the backfield and force a few plays that resulted in lost yards for the Tigers. The Bulldogs front seven also put pressure on the quarterback, leading to multiple sacks and errant throws from the West Sabine signal caller. The Bulldogs secondary looked good as well, as Bryce Rains and Matt Bailey each recorded an interception. If the Bulldogs defense keeps improving at this rate, they will be a tough unit to deal with this season.

On the offensive side of the ball, the Bulldogs started off strong, highlighted by Cody Walsh's long touchdown run and Matt Bailey's long touchdown pass to Bryce Rains early in the game. After the Bulldogs hot start on offense, they quickly cooled down, and struggled throughout the rest of the game. They couldn't get the running game going, and quarterback Matt Bailey was harassed in the pocket by the Tigers defense. If the Bulldogs plan on scoring points this season, they are going to have to get things straightened up on the offensive line to give Bailey more time to throw and open up holes for the running backs.

The Bulldogs will travel to Hemphill on Friday, in what will be their last scrimmage before taking on Lovelady in the season opener on August 31 to scrimmage the Hemphill Hornets and Shelbyville Dragons.