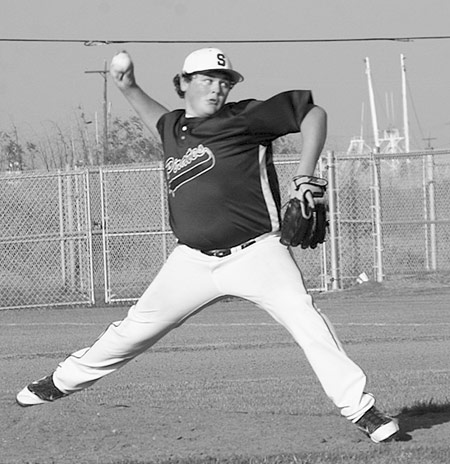 Spurger High School is known for producing some great athletes in basketball, volleyball and softball, but people often forget about Spurger's baseball team. Although the team has had a few hard years in the past, the new coaching staff and a slew of upcoming new players have brought a new light into the less than ideal baseball program.

One particular up and coming player for the baseball team is Cody Winkle, who played varsity sports as only a sophomore last year.

During his sophomore year he was a starting pitcher for the Pirates averaging nine strikeouts per game. He was also selected to play in the TASO All-Star game in Lamar. Only two other players were chosen from Spurger, and Winkle was one of the youngest players to be chosen. He also received second team all district pitching his freshman year.

In addition to baseball, Winkle plays basketball and runs cross-country. He also helped to carry the basketball team into playoffs this past season.

Winkle's future goals are to stay active in baseball and to work hard so that he can play for a college baseball team someday.

"I want to become as good of a pitcher as my dad and uncle," says Winkle.

But, throughout all of his accomplishments this past year, Winkle is able to stay grounded and realize that hard work and determination can go a long way.

"I have learned that hard work pays off in the end," says Winkle. "In order to accomplish something you have to work hard and put forth dedication, and learn from your mistakes and failures. Learning from mine helps me to become stronger."

Winkle also understands the importance of being a good team mate and realizes he woud be no where without his teammates.

"I always give 100% to be a dependable team mate," says Winkle. "I believe that a good team is made up of individual players that all get along and care enough for the sport that they give 100%. We are only as strong as our weakest player."

Be sure to catch Cody Winkle in the upcoming baseball or basketball season before he goes pro!