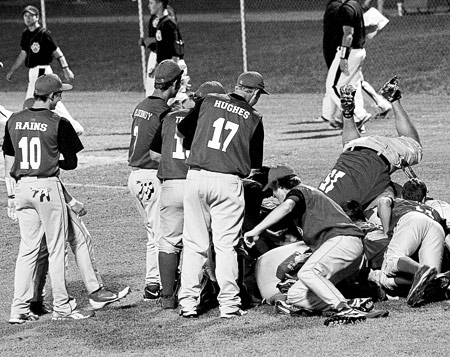 The Colmesneil Bulldogs had a fantastic season, earning a district championship and getting a bye week in the first round of the playoffs. Even though they came up short in the playoffs, the coaches from around the district handed out a handful of awards to the 2012 district champs. The MVP of the entire district was senior pitcher Cullen Barker. The defensive MVP award was handed to catcher Daniel Bruton. The Bulldogs had six players earn First Team All-District honors. That list includes pitcher Bryce Rains, first baseman Dylan Falcon, shortstop Kyle Tant, third baseman Zach Costellow, outfielder Kolton Bass, and designated hitter Chris Thedord. One member of the Bulldogs was placed on the Second Team All-District team, and that was second baseman Dakota Thedford.

2013 players preview: The Bulldogs are returning six of nine starters for the 2013 season. Seniors Cullen Barker, Daniel Bruton, and Kyle Tant are graduating, leaving the Bulldogs with some big shoes to fill for next season. Barker, the districts most valuable player, was the starting pitcher and batted second in the Bulldogs lineup last season. It's going to be tough to replace the MVP, but upcoming senior Bryce Rains will likely step in as the Bulldogs starter next season, leaving upcoming juniors Cole Lowery and Matt Bailey to battle for the number two job in the off season. Arguably the biggest question coming into next season will be how they are going to replace Daniel Bruton. Bruton was the defensive player of the year for the Bulldogs, the number three hitter in their lineup, and also led the team in homeruns. Look for upcoming junior Dylan Falcon to leave his spot at first base and make the switch to catcher next season. As for replacing Tant, the Bulldogs will have to find someone who can be as efficient as he was last season. Look for upcoming senior Dakota Thedford to switch from second base to shortstop for the Bulldogs. How the Bulldogs fill those three spots next season will determine how well or how poorly they defend their district championship next season.

2013 coaching preview: The Bulldogs will be looking for the successor to former head coach Alex Davis next season, who had great success, leading the Bulldogs to the playoffs in each of the past three seasons. Colmesneil has not announced who the next baseball coach will be.