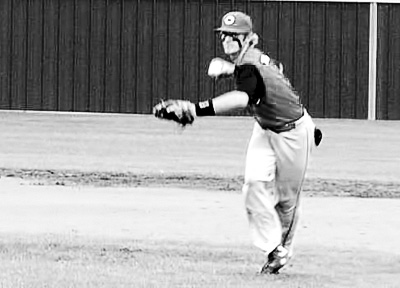 In sports, nothing is for certain. Bad teams beat good teams. Teams collapse, teams rise. All of this can happen on any given day at any given time. In no sport is this truer than in baseball. A baseball team can play flawless for six innings and then slip up in the seventh inning and get beat, leaving fans and players wondering what just happened. In game one of the Colmesneil Bulldog vs. Cushing Bearcats Area Playoffs series, the Bulldogs were on the wrong end of a seventh inning collapse after nearly perfect baseball.

Senior Cullen Barker started the first game of the series for the Bulldogs, and in the first inning, he struck out two batters leading to a shutout inning. The Bulldogs were able to strike blood first, scoring two runs in the second inning on Kolton Bass' two-run single. The Bearcats were able to tie up the game in the third inning, making the score 2-2 going into the fourth inning. For the next three innings, neither team was able to put runs on the board, thanks to stellar pitching on both sides. Cullen Barker went into the seventh inning with a tie ball game, and 10 strikeouts. The Bulldogs were able to record two outs, leaving every fan thinking that the Bulldogs were going to get a shot to win this game in the bottom of the seventh inning. But that wasn't the case. With two outs, the Bulldogs collapsed and managed to give up six runs in the seventh inning. With an 8-2 score, the Bulldogs rallied and made the score 8-4, but weren't able to capitalize on having the bases loaded and opportunity to tie the game. The Bulldogs then put themselves in a situation where they had to win the next two games in order to advance to the next round of the playoffs.

In game two, the Bulldogs came out with a sense of urgency. The Bulldogs were down a run going into the third inning, and then the offense exploded for a four run inning highlighted by Daniel Bruton's two-run shot to the wall in centerfield, Chris Thedford's RBI, and Dylan Falcon was able to steal home on an error. In the next inning, the offensive firepower was still on display for the Bulldogs. Falcon, Thedford, and Zach Costellow were all able to bat runs in, giving the Bulldogs a 7-1 lead. Bryce Rains was dominant on the mound, consistently pitching strikes and wowing the crowd with two different circus catches on the mound. The Bulldogs continued to handle Cushing, beating them by a final score of 9-2 and forcing a winner-take-all game three.

In a pivotal game three, the Bulldogs scored first when Cody Walsh stole home. Sophomore Cole Lowery took the mound with a one run lead. Lowery showed signs of being nervous, but he also showed why the coaching staff had confidence in him to pitch the Bulldogs most important game of the season. Lowery gave up a run on two hits and two walks, but also struck out two batters. When Lowery took the mound in the second inning, he was able to survive a scare, only giving up a run on three hits after having the bases loaded. The Bulldogs continued to struggle to score runs in the third inning, leaving Lowery to try and keep the game within reach for the Bulldogs. Errors plagued the Bulldogs in the third inning, and led to Rains relieving Lowery after just three innings. Rains took the mound with a score of 5-1, and an error in the outfield left the Bulldogs in a 7-1 hole to start the fourth. The Bulldogs were never able to close the gap, as they fell to the Cushing Bearcats by a final score of 8-1, ending the Bulldogs season.