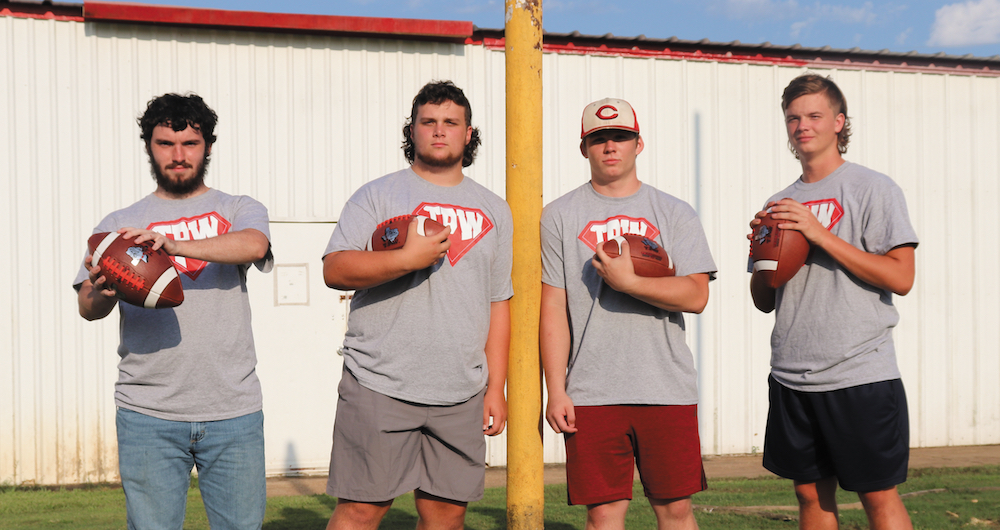 COLMESNEIL – With five returning seniors, most of whom have been starters all through their high school careers, and some fresh faces on the coaching staff, Coach Cody Day and the Colmesneil Bulldogs are looking forward to a healthy, successful season.

As a result of the University Interscholastic League’s latest realignment, the 2A-2 Bulldogs are now in a seven-team district, which includes powerhouses like Lovelady and Tenaha. The team’s numbers are up, and as Day said, dedication to winning is strong. The team finished 2-7 overall during its 2019 campaign and ended fifth in District play (1-4.) This season finds the Bulldogs booked to take on Overton’s Mustangs for their first District game on Sept. 25.

“It’s a tough district…I think we’ve done a good job of staying in contact with the kids and keeping them interested,” said Day.

Both Day, who is in his second year as CHS’s athletic director and head football coach and new Bulldogs offensive coordinator Justin Hilliard spoke about the level of dedication in the weight room this summer.

Day said that with school closed down during the spring in light of the COVID-19 pandemic response, it made his athletes hungrier to train and become successful on the gridiron. “Now we have to go through a bunch of different hoops and do a lot of different things,” he said.

The two-and-a-half months without workouts and drills made the players want to get back together and start prepping for the fall season as soon as possible, Day said.

Hilliard said that when workouts began in early July, there was a huge turnout in the weight room for the Bulldogs. He added that all of the protective measures were put in to place and closely practiced, and Day said “We tell the kids that this is the safest place they can be. Everything here is sprayed-down when they leave.”

Most of the returning seniors, the coaches say, are capable of playing several positions and know the game well on both sides of the ball. The team’s offense has eight returning starters and on the ‘Dogs’ 3-4 defense, there are eight returning starters, as well. Stewart, who was named Second Team All-District last season, will lead that defense, along with junior center Koyler Marshall, who received a First Team All-District nod in 2019.

Overall, for the program, the Bulldogs’ ranks number more than 30, something that Day said he and the other coaches are excited about, since the numbers for many teams are down this season. “These kids, they work hard, and they want to win,” the ‘Dogs Assistant Coach Coleman Butter said. Assistant Coach Caleb Hardy added that “everyone is excited to be here.”

With the continuing effort to curb the spread of the coronavirus, many parents have opted to take the home-based distance learning path, and most districts, including CISD, have voted not to allow home-based learners to be able to take part in extracurricular activities.

The ‘Dogs will scrimmage the Hull-Daisetta Bobcats out-of-town on Thursday evening at 5 p.m. Next week, they play the Burkeville Mustangs at 7 p.m. on Taylor Field.