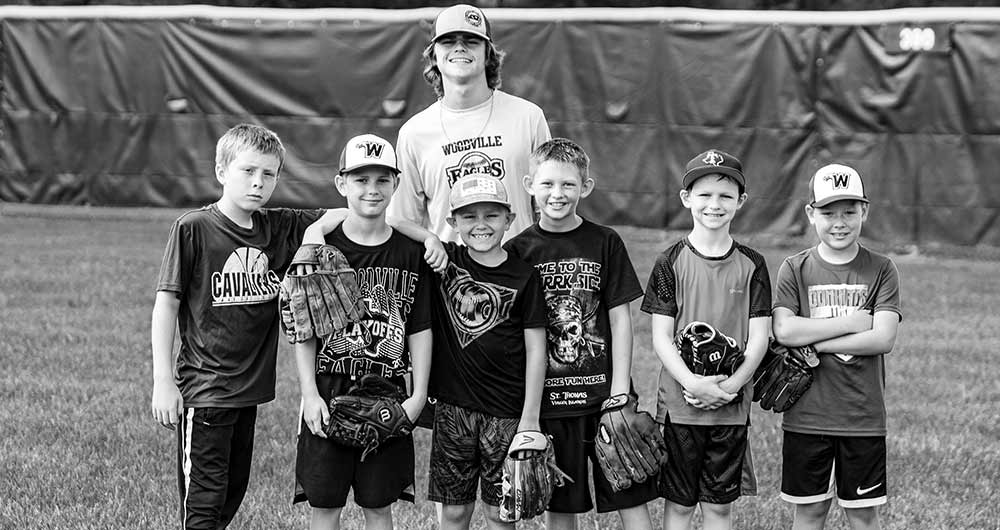 WOODVILLE— Woodville Eagles head baseball coach Woody McClendon and a handful of his playoff varsity squad hosted their summer baseball camp to give local kids in the community an opportunity to learn from high school coaches and players.

Approximately 40 baseball players took part in the camp that was held at Hennigan Park last week.

“This is just something we had to do,” McClendon stated. “For our program to go in the right direction, we have to get kids bought in to what we are trying to build here in Woodville at this age group.” It’s no secret that Woodville loves baseball. With baseball holding the lone state title the city has ever experienced, it’s no wonder that baseball has a special place in the hearts of the kids and the community. “Back then the Little League played a huge factor in preparing those players early. We have to get back to that,” McClendon said.

“We are building a foundation,” he said. McClendon is sure to use the word ‘we’ because he fully understands that this is a team effort. Contributing to the effort are high school players form this year’s roster. “These young players look up to the high school kids wearing that Woodville uniform,” McClendon noted as he mentioned a few of them by name. “Calan Wainwright stepped up great as a freshman for us this year. Jack Fowler is about to see his role on the team increase significantly. Kyler Coleman is out here and doing great things. He picked up a lot in the latter part of the season and really improved for us this year. Wyatt Bell is here teaching these kids and he played just about every position on the field for us. Reese Shaw is another one that these kids look up to.”
It’s evident when talking to McClendon of how proud he is of his program and his players. It’s infectious listening to him heap praise on his high school players and then brag about the young kids who play coach pitch and little league that are coming up who really comprehend the game of baseball.

McClendon also said that the older kids get a lot out of the camp by giving back to the community. “Some of these seniors know what kind of quality we have to work with, and they want to be here to symbolically pass the torch on to the next generation of Eagles.” McClendon closed by saying, “Everyone wants to be part of something great and that is what we have here with the kids in this community. They are all great kids who love this game and love putting in the work to become better.”

McClendon said this camp was a great success in his second year at the helm of the high school program and looks forward to having an even better camp with more attendees next summer as he said he hopes to top 50 campers next summer.