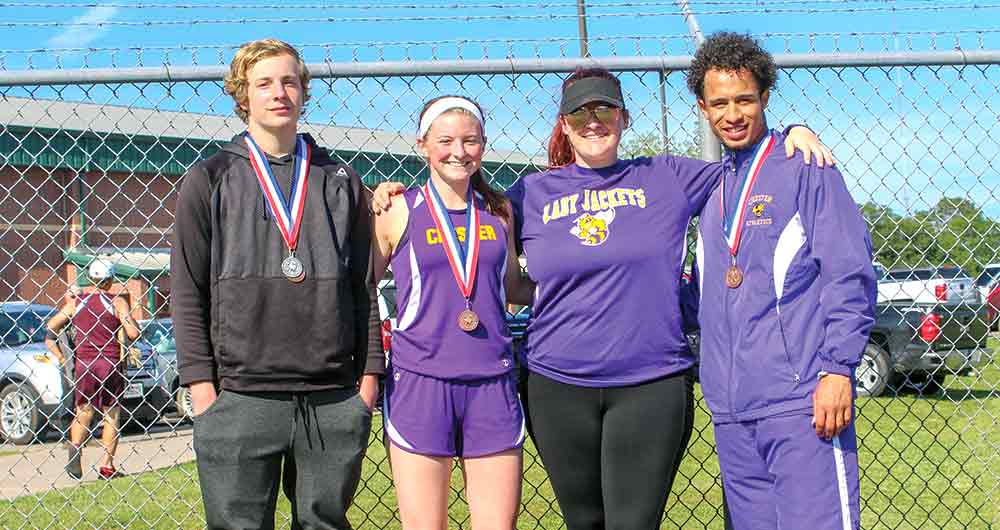 These Yellowjackets will represent Chester at the 1A Region IV Track and Field Meet in Huntsville on April 26-27.  Pictured are Levi Goins, Annie Rayburn, Coach Megan Nichols, and Shane Ison. Not pictured are Faith Loughner and Trinity Jerkins. (JANA RAYBURN | TCB PHOTO)

CHESTER – The Yellowjacket track teams competed in their Area Track Meet on April 15 in Livingston. Several athletes advanced to the regional meet, which will be held this weekend in Huntsville. Faith Loughner placed first in the 110m and 300m hurdles and Trinity Jerkins placed fourth in the 300m hurdles. Annie Rayburn placed third in the 800m run. Shane Ison placed third in the 100m dash and third in the 400m dash. Levi Goins placed second in the 110m hurdles and fourth in the 300m hurdles. The regional meet will be held at Bowers Stadium on the campus of Sam Houston State University in Huntsville on Friday and Saturday, April 26-27.

The Chester Lady Jackets got a much-needed boost last Tuesday as they defeated the Colmesneil Lady Dogs in Colmesneil. The Lady Jackets built up a six-run lead in the top of the fourth inning and held off the Lady Dogs to win by a score of 8-7. Coach Becki Byrd said she was so proud of her team for playing ball until the very end. Byrd added, “It wasn’t an error free game, we made simple errors at the worst times, but the good plays outweighed the bad.” Byrd praised Olivia Gilzow for a great job pitching and Chianne Chandler and Cheryl Clack for their key plays in the infield. Belle Gilzow hit a line drive double that was the highlight of the fourth inning for the team. Byrd said, “This game showed our potential and happened at a great time for us just before playoffs.”
The Lady Jackets played their final district game of the season on Friday, April 19 at home against the Big Sandy Lady Wildcats. The Lady Jackets were tied in the third inning and managed to take the lead in the fourth with a score of 5-3. However, the Lady Wildcats took the lead for good in the fifth inning, and Chester ended up losing the game 5-10. Belle Gilzow led the Lady Jackets at the plate, going two for four, including a double. The Lady Jackets will face the Burkeville Lady Mustangs in round one of the state softball playoffs on Thursday, April 25 at 4 p.m. in Chester.

The Chester Yellowjacket baseball team racked up another win last week by defeating Burkeville by a score of 7-6. Sophomore Braydin Davis made a couple of good plays on second base. The win sealed a playoff spot for the Yellowjackets, who will advance as the second-place team in the 1A division.

The Jackets traveled to Brookeland for their final district game of the year on Friday, April 19. The Jackets built up a lead, but were unable to capitalize, and lost the game due to several errors.

The Jackets will get a bye in the first round of the state playoffs and will automatically advance to the regional quarterfinal round.