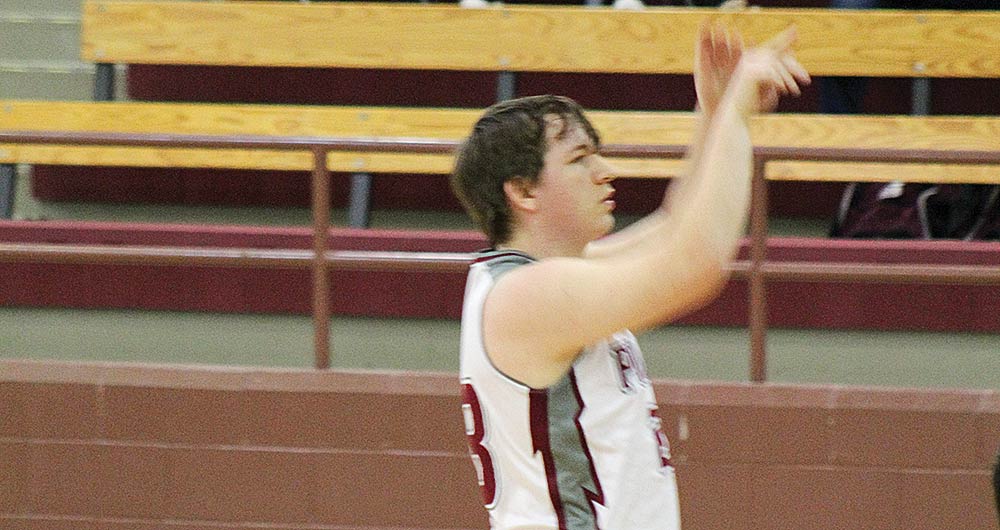 SPURGER – The Murphy Martin Gym was packed for Senior Night last Tuesday. Before the game, fans and visitors viewed tables decorated by proud parents. Pictures, awards, letterman jackets and other items, unique to each athlete, were on display to recognize those who wear the Pirate jersey.

The Lady Pirates took the court first to play High Island. Spurger played an unbelievable first quarter causing Coach Kristi Henderson to say, “I have never been involved with a quarter like that before. The last four minutes were incredible!”

In the first two minutes of the quarter, Gracie Greenwood had the opening possession and basket, followed with three-point shots by both Lauren Griffin and Mckenzy Hatton. A play, with a series of passes from Hatton to Greenwood to Shelly Martin and then to Tabitha Martin to score, was only the first of many spectacular plays in the first. Griffin caught a ball thrown by High Island and passed to Hatton for two. Shelly Martin had the ball and passed to Tabitha Martin under the goal for two. With 1:56 left in the first, Spurger kept High Island to two points. When Spurger last played High Island, the Lady Pirates won by only 10 points. This game, Spurger dominated the first quarter (32-6). The Lady Pirates continued to control the game and won (64-46). Tabitha Martin was high scorer with 15.

Varsity boys were up next to try for another win against High Island. Hunter Jenkins started the game with a run through the open lane for two points. Tyler Dozier quickly added two, Dozier to Gantt Stone under the goal for two, and Jacob McFarland had a three-pointer. Samuel Tompkins was fouled and made one of two free throws. Dozier ended the quarter with a three, and Spurger denied High Island from scoring (16-0). The Pirates continued their path to victory in the second quarter as Samuel Sirmons scored two, Hunter Jenkins made a three, and McFarland contributed two three-pointers (29-13). The third started with a pass from Dozier to McFarland for three, followed with another three from Hunter Jenkins. Zack Covington stole a ball, had a blind pass around an opponent, and passed to McFarland for two. Covington would later pass to Colton Jenkins for two and the foul. The third ended with three-point shots from Covington and Billy Williams (46-20). The fourth began with a steal by Covington to Dozier for two. Williams passed to Christian Russell who bounce passed back to Williams for two. Colton Jenkins had a cross court pass to Russell for three. Hunter Jenkins made a three with 1:19 left to play. Hunter Jenkins then stole the ball, had a fast break down the court, and passed to Dozier for two. Dozier was fouled off the basket and made both free throws. Varsity boys win (65-31).

The Lady Pirates played a warm-up game against State ranked Hull Daisetta (22nd in 2A) last Friday. Both teams have undefeated seasons making for the perfect match-up. Spurger did not let the size or ranking affect their game, as they played like they had all season, with teamwork and intensity. Both teams proved why they are undefeated in their respective districts. The Lady Pirates led Hull Daisetta (27-22) at the half. The fourth quarter started with a one-point lead for Spurger (37-36). After another exciting quarter, Hull Daisetta edged out Spurger in the last seconds of the game (46-48). Coach Kristi Henderson offered her players affirmation, along with direction, to enable them to remain calm and productive from start to finish. The Lady Pirates clearly showed they are conditioned and ready for the week ahead.
The Varsity boys played at Chester last Friday. The Pirates had a nine-point lead at the half (29-20) and continued to expand their lead in the third. In the end, it would be Spurger with the win (66-34). Spurger varsity boys secured 3rd place in District 29-1A, following their win against High Island. After their last game of the regular season, against Leggett on Feb. 12, they will begin their play-off run.