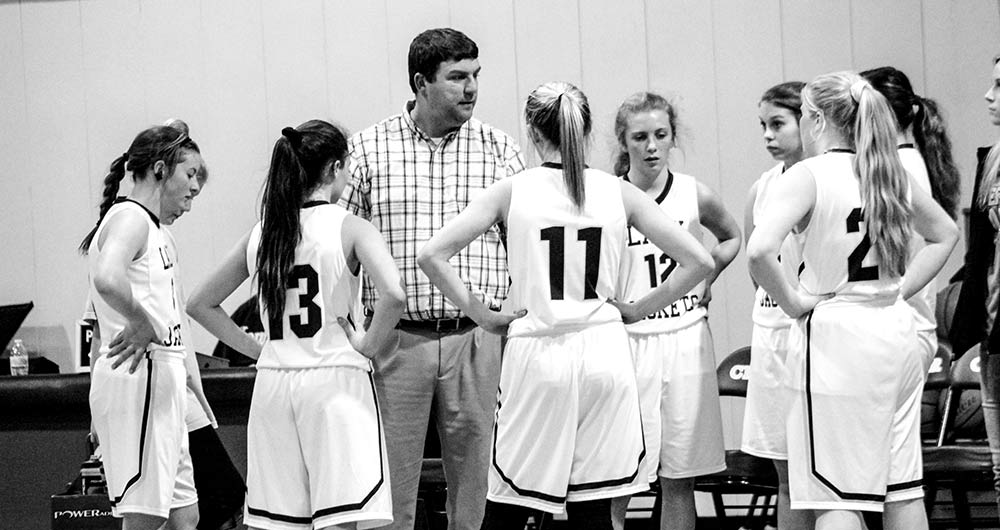 Lady Jacket head coach Cory Hines speaks with his team during a recent basketball game.  Hines has led the team to the state playoffs for the first time in several years.  (JANA RAYBURN | TCB PHOTO)

Lady Jacket Basketball – The Lady Jackets started off the week with a missed game. Goodrich forfeited their district game scheduled for Tuesday, Feb. 5. This gave the team some extra time to practice and get ready for the next few games.

The team played against the High Island Lady Cardinals on Friday at Leggett High School to decide second and third place.

The game was close all four quarters, and both teams fought hard the entire game. In the end, the Lady Jackets came up short, losing to High Island by three points, 31-34. The Lady Jackets will go into the post-season in third place.

Yellowjacket Basketball – The boys basketball team hosted the Goodrich Hornets on Tuesday, February 5. The boys played hard against the Hornets but were not able to pull out a win. The Jackets lost the game by a score of 19-34.

The Jackets played another home game on Friday, Feb. 8 against the Spurger Pirates. Coach Donald Mayhugh said his team played with the Pirates the first half, but just ran out of gas, losing to the Pirates in the end. Shane Ison led the team with 23 points against the Pirates.

Yellowjacket Baseball – Spring sports are getting started around the area, and Coach Marty Thompson is anxious to get started with baseball. Thompson says that his team is young but believes they will spend the season learning a lot. His goal this season is to work hard and improve with each game.

This district is comprised of both 1A and 2A schools, but there is a separate championship for 1A, so Burkeville, Chireno and Chester will have to compete for the two playoff spots.

The boys will hit the field on Feb. 26 for a home game against Broaddus at 4 p.m.

Lady Jacket Softball – Coach Becki Byrd is very excited about this 2019 softball season. Byrd says the team has not been able to get started liked she wanted due to the success of the girls basketball team. Byrd and the Lady Jackets will have one main goal this season, and that is to go deeper in the playoffs than last year. There are several returning starters from last year, and these athletes will have to compete for their positions with a promising group of freshmen. Byrd is putting a great deal of faith into these freshmen and believes they will bring a lot to the team.

Senior Night – Chester high school acknowledged the seniors prior to the boys basketball game on Tuesday, Feb. 5. Seniors and their parents that were recognized were Ashlyn Overstreet, Maggie Mayo, Madison Berry, Taylor Handley, J.T. Martin, Joseph Aiena, Shane Ison and Thomas Hughes. Jamir Alvarado is also a senior but was not present for recognition. These seniors will have a busy spring filled with sports and activities before they graduate at the end of May.