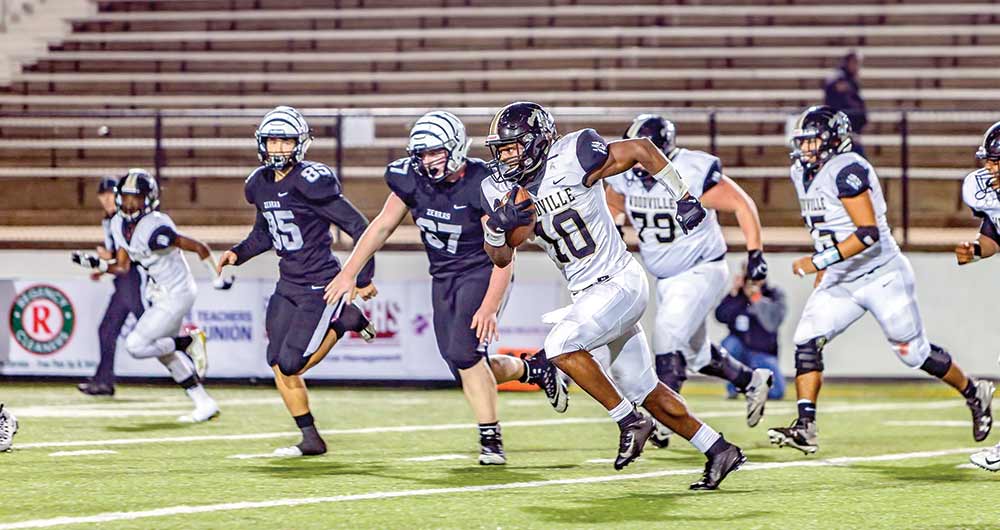 Marvelous Martin –  Woodville’s Zack Martin (10) cuts through the Zebra defense to score the final touchdown of the season for the Eagles. (HALE HUGHES | TCB)

TYLER—The Woodville Eagles magical football season came to an end on Earl Campbell Field in Tyler Rose Stadium last Friday night. The season had very high hopes for Woodville making a deep run into the Class 3A DI playoffs, but it wasn’t meant to be as the Grandview Zebras sent the Eagles home, again in the second round. This is the third straight year that the Eagles have been bounced out of the playoffs in the second round.

The Eagles have had fits with District 9 and District 10 eliminating them from the second round of playoff games the last three years. Cameron Yoe took Woodville out in 2016 and Rockdale eliminated the Eagles in 2017, and this year it was Grandview. This is also the third time that Grandview has beaten Woodville in playoff competition. Last year, Grandview beat the Woodville girls in basketball in the regional tournament. The year before, the Zebras knocked Woodville out of the softball playoffs.

The teams last Friday night were as contrasting as their uniforms. The Eagles showed up wearing white pants and jerseys with black helmets and the Zebras arrived in black pants and jerseys with white helmets. Woodville was off to a good start early as they forced Grandview to punt on their first drive and were able to put together a solid first drive that ended in a halfback pass from Zack Martin to Kemo Moran to give the Eagles an early lead. Woodville scored quickly the way they have for the majority of the season. It would be the final time the Eagles would have a lead on their opponent this season. Grandview struck back with their own pass play to tie the game at 7-7 and that score was how the first quarter ended. The Zebras then took a 14-7 lead on a run play with 8:55 left in the second quarter. Martin took the team on his back and made a tremendous 50-yard touchdown run that began around the right side and Martin weaved his way back through Zebra defense to tie the game up at 14-14 with 7:55 left in the second quarter.

From there it was all Grandview. The Zebras scored two more touchdowns before the half and both teams went in at the intermission with Grandview having the momentum and the lead, 28-14. After halftime, Woodville came out and went three-and-out and punted the ball to the Zebras and Grandview wasted little time increasing their lead as they completed a 56-yard pass to make the score 35-14 at the 8:53 mark of the third quarter. The Zebras added one more score in the fourth that cemented the victory and the final score was 42-17 at the end of the game.
It was a bitter, yet all-too-familar end to a tremendous and unprecedented season for the Eagles. Woodville posted the school’s first ever three-peat as district champions, first ever undefeated regular season and first ever 11-win season for the Eagles.