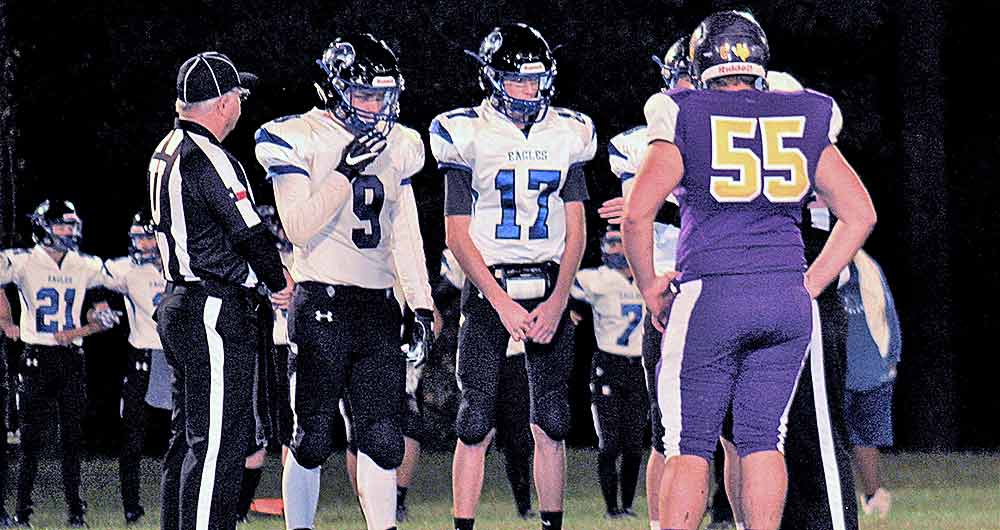 Yellowjacket senior J.T. Martin serves as team captain for the last time prior to the Jackets football game against Apple Springs. The Jackets lost the game 6-52. (JANA RAYBURN | TCB)

CHESTER – The Chester Yellowjacket football team finished out the 2018 season with the same good sportsmanship and class that they have displayed all throughout the year.

J.T. Martin, the team’s only senior, was the sole captain for the game. Martin proved to be a positive role model and leader for this young team all season long and will be missed next year for sure.

Martin and his team took on the Apple Springs Eagles Friday, Nov. 9. The Jackets started out strong, but lost momentum when one of their teammates, Dakota Chandler, was injured during the first quarter. Chandler suffered a serious knee injury and was air lifted to Texas Childrens Hospital in Houston. Adjustments were made to fill Chandlers position, but the Jackets just were not able to stop the Eagles and lost the game 6-52.

Coach Jeremy Wooten is proud of the way the team handled themselves, playing hard each week and improving greatly from last season. Martin and Jared Young led the team defensively, while Jake Pitre scored the team’s only touchdown.

All-District selections have been announced, and the Lady Jackets have quite a few players making the cut. Jasmine Mitchell received co-offensive player of the year and Brianna Kort received newcomer of the year. Receiving first team honors were Taylor Handley and Belle Gilzow. Annie Rayburn and Ashlyn Overstreet got second team nods. Faith Loughner and Josey Sturrock received honorable mention.

The girls basketball team started practice last week and Coach Cory Hines has high expectations from his team. The Lady Jackets have five returning players, and the team will benefit from experience gained last season. District alignment changes have placed the Lady Jackets in the district with Goodrich, Spurger, Leggett, High Island and Burkeville.

The boys basketball team had to squeeze in some early morning practices in order to be ready to start the season while many team members were still playing football. Coach Donald Mayhugh will lead the Jackets again this season. The team lost four seniors from last year, which will definitely be a challenge for the team.

The boys and girls will travel to Little Centerville on Friday, Nov. 16. The girls tip off at 2 p.m. with the boys to follow around 3:30 p.m. During Thanksgiving break, the teams will play back-to-back games on the road. Monday, Nov. 19, the teams will travel to Martinsville with the girls game beginning at 1 p.m. The boys will play at 2:30 p.m. They will be on the road again on Tuesday to Zavalla, with the girls again getting started at 1 p.m., and the boys game following around 2:30 p.m.

The junior high boys and girls will play a home game on Monday, Nov. 26 against the Good Samaritan Fellowship Hornets. The girls’ game will get started at 5 p.m. with the boys’ game to follow.