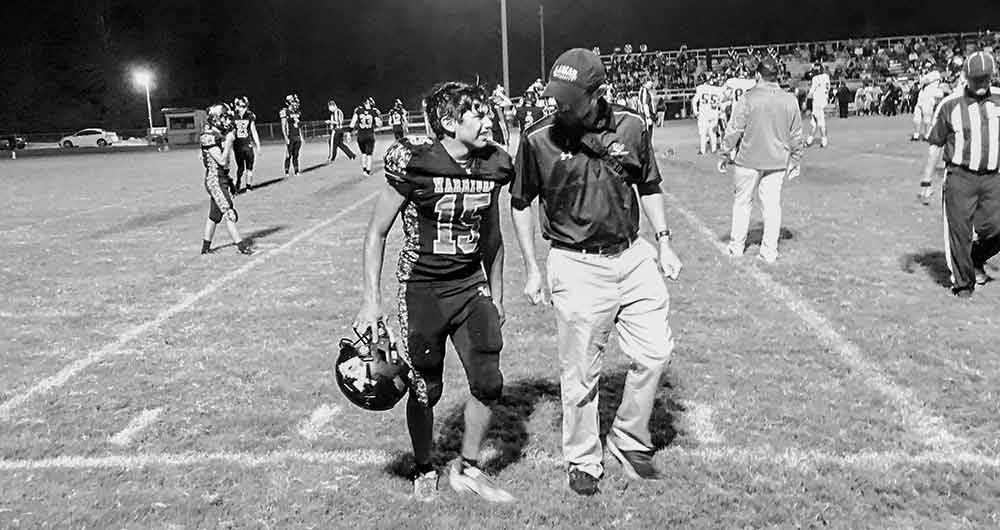 Warren’s Tony Solano (15) leaves the field after being shaken up vs Anahuac. (ROBERT JACBOUS | TCB)

WARREN – Melody Sanford of Warren wrapped up a regional berth in cross-country with a tenth-place finish at the District 23-3A meet at a wet and muddy course at Wildwood on Oct. 10.  Sanford will run in the Region 3 meet in Huntsville on Oct. 22.

Other runners who competed for Warren were Seth Smith, who placed 18th in varsity boys’, Kendrick Noceja and Anthony Foxworth, who each ran their personal best.

Lady Warriors volleyball remains in playoff contention
The Warren volleyball team won two key matches last week to improve to 6-5 in District 22-3A play with three matches to go in the regular season.

The Lady Warriors beat Kirbyville at home on Oct. 9 and followed that up with another home win over Anahuac last Friday.

The Lady Warriors played an away match at East Chambers on October 16. If the Lady Warriors hope to qualify for the playoffs, however, their work will be cut out for them. Warren’s last two matches of the season are against two state ranked opponents, Buna, and Hardin, who both defeated Warren in the first half of district play.

Warrior football drops to 0-6 overall, 0-3 in District 12-3A play with loss to Anahuac
Warren’s winless 2018 football season continued with a 71-0 homecoming night loss to the Anahuac Panthers last Friday.

Anahuac rolled up 512 yards of offense on the evening, 408 yards rushing and 104 yards passing. The Panthers jumped to a 14-0 first quarter lead thanks to a three-yard rushing touchdown by Panthers quarterback Foster Kruezer with 4:23 left in the quarter.

With a minute to go in the first quarter Kreuzer then hit fullback Edward Ramos with a 25-yard touchdown pass and the Panthers’ lead grew to 14-0.

Anahuac added 23 second quarter points to extend the halftime lead to 37-0. With 10:14 left in the quarter running back Tyrone Wilson scored from 10 yards out to make it 21-0.

After Anahuac intercepted a Warren pass, the Panthers added a five-yard rushing touchdown with 8:27 left in the half to extend the Anahuac lead to 28-0.

Anahuac added a field goal with 44 seconds until halftime to make the score 31-0. Warren then fumbled the ball at their own 21.

The Warriors received the second half kickoff, but three plays went nowhere, and a Warren punt gave Anahuac the ball at their own 47.

Four plays later, Anahuac’s Kruezer ran around left end for a five-yard touchdown with 8:46 left in the third quarter to give the Panthers a 44-0 lead.

In the fourth quarter, a 10-yard run by Landyn Fanus, a 35-yard interception return by Trent Robertson for a touchdown, and another touchdown by Fanus, this time a 38-yarder, pushed the final margin to 71-0.

With the win over Warren, Anahuac evened their record for the season at 3-3, and put their District 12-3A mark at 2-1.
Warren hopes to find their first victory of the 2018 season this Friday with an away game against the Buna Cougars. The Cougars are 5-1 overall and 2-1 in district play.