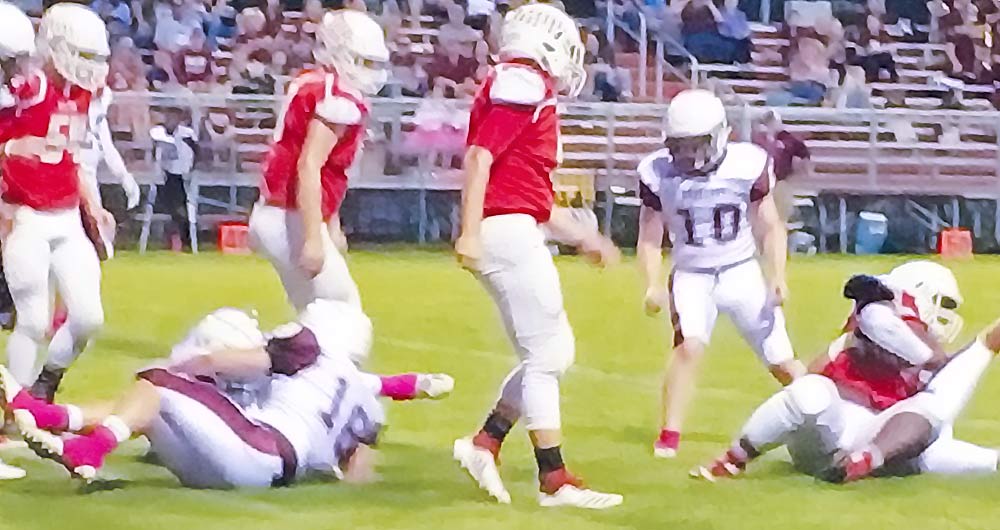 COLMESNEIL – The first place Colmesneil Lady Dogs’ volleyball team continued their winning ways by defeating Kennard on Oct. 2 in an away contest 25-20, 25-11, 25-18, and followed that up with another victory at home over Chester last Saturday morning 25-10, 25-20, 25-19.
The Lady Dogs improved to 7-0 in District 23-2A play. Colmesneil played Goodrich in an away match on Oct. 9 and were scheduled to play a home match this Friday against Leggett, but Leggett recently cancelled the rest of their season.

Bulldogs trounced by Lovelady in district opener
The Colmesneil football team was beaten soundly by Lovelady, the seventh-ranked team in the state in Class 2A-Division 2. After seeing themselves down 42-0 at halftime, the Bulldogs ended up on the short end of a 66-0 final score in their district opener.

With Jordan James leading the way at quarterback for the Bulldogs, the night started promising as they took the opening kickoff and on their opening drive gained a couple of first downs and advanced into Lions’ territory. However, Colmesneil ended up turning the ball over on downs at the Lovelady 35.

After Lovelady gained four yards in two plays, on third and six Lions’ quarterback Logan Lowery hit wide receiver Michael Price for a 63-yard touchdown. The two-point conversion was no good and Lovelady led 6-0 with 6:50 left in the first quarter.

On the Bulldogs’ next possession, Deavin Wooten ripped off runs of five and eight yards. The Lovelady defense stiffened after that and took over on the 50-yard line after a Colmesneil punt. From there Lovelady’s Price caught another touchdown pass from Lowery to make it 12-0 Lions with 2:08 left in the quarter. The two-point conversion was again no good thanks to Colmesneil’s Wesley Dobbins stuffing the running play up the middle.

Colmesneil received the ensuing kickoff and returned it to their own 30. Three plays netted two yards for the Bulldogs as the first quarter expired.

On the first play of the second quarter Lovelady got the ball on the Colmesneil 38 after a shanked punt by Colmesneil. On the first play from scrimmage after the punt Lovelady’s Tre’ Hawkins scored untouched from 38 yards out on an end around play to the right side. After another two-point conversion was unsuccessful, the score was now 18-0 Lovelady.

Jordan James returned the ensuing kickoff to the Colmesneil 22. The Bulldogs offense gained on two yards in three plays from there and were forced to punt again. Another shanked punt by Colmesneil gave Lovelady the ball on the Colmesneil 32.

After an 18-yard gain by Lovelady on first down to the Bulldogs’ 14, Colmesneil’s defense stiffened, and Wesley Dobbins sacked the Lovelady’s Lowery for a 15-yard loss on third down. An incomplete pass by Lovelady on fourth down gave the ball to Colmesneil on their own 35.

The Lions then intercepted a Colmesneil pass on third down and from the Bulldogs’ 37, Lovelady quarterback Lowery hit Michael Price from there for their third touchdown connection of the first half. Lovelady finally converted on a two-point conversion and they now led 26-0 with 6:07 left in the first half.

Colmesneil proceeded to fumble the Lovelady kickoff and the Lions took over on the Bulldogs 30-yard line. Lovelady gained 18 yards on their first down running play and from there Lowery connected on his fourth touchdown pass of the half, this time a 12-yarder to Tre’ Hawkins. Hawkins ran in the two-point conversion, and the Lovelady lead widened to 34-0 with 4:56 left in the first half.

The Bulldogs again fumbled the Lovelady kickoff, but this time they recovered the ball on their own five-yard line. Colmesneil’s offense went nowhere again, and on fourth and eight the Colmesneil punt was blocked, and Logan LeBlanc of Lovelady recovered the ball in the endzone for a touchdown. The two-point conversion was again good, and the score was now 42-0 Lovelady with 2:36 until halftime.

Colmesneil and Lovelady changed possessions after that and the first half clock expired with the score 42-0 Lovelady.

Lovelady received the second half kickoff and Tim Johnson of the Lions raced 64 yards down the left sideline for the score. After another successful two-point conversion, Lovelady now led 50-0 with just 19 seconds expired in the second half.

The two teams exchanged punts and after Colmesneil stalled on their own 43, they punted to Lovelady. Michael Price returned the punt for a touchdown, his fourth on the night. Quarterback Lowery scored on a keeper play for the two-point conversion, and Lovelady upped the score to 58-0 with 6:30 left in the third quarter.

The benches were emptied after that, and Lovelady added a fourth quarter touchdown and one last two-point conversion to make the final 66-0.

The schedule doesn’t get any easier for the Bulldogs as they travel to Grapeland this Friday to take on the Sandies, the ninth ranked team in the state in Class 2A-Division 2. Grapeland is 5-1 on the season, losing only to Class 3A Crockett 19-18 on Sept. 14. Grapeland has rolled over their other competition, beating Milano 27-0, Cayuga 28-8, and Normangee 47-18. The Sandies are also 2-0 in District 12-2A, whipping Evadale 41-6, and Burkeville 52-0.