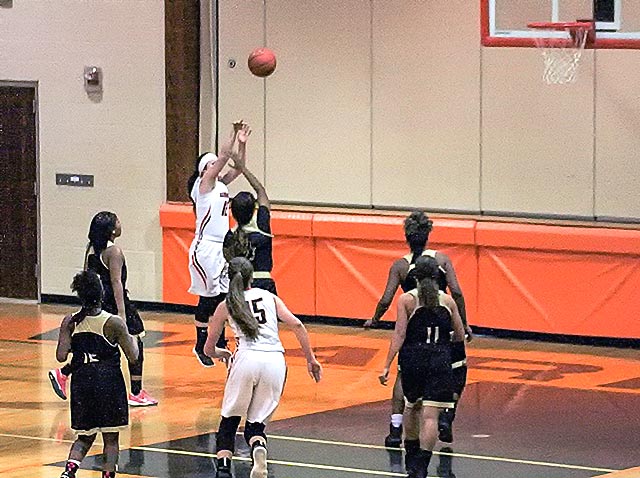 Lady Warrior Basketball- Last Tuesday, the Lady Warriors played host to the Lady Panthers of Anahuac in a district matchup that came down to the last shot. Warren's Elizabeth Clymer got the Lady Warriors going with six straight points, out of her game high 21 points, to take the early lead. Warren was able to build a 28-15 halftime lead with buckets from Laikyn Bell and Erin Foster.

Clymer and Bell traded baskets with the Lady Panthers in the third, but Anahuac was able to come within six at 36-30 at the end of the quarter with a 15-8 run.

In the fourth, Brenna Buckner hit a crucial jumper to put the Lady Warriors up 42-35. The Lady Panthers then answered with back-to-back 3-point shots to come within one at 42-41 with 90 seconds remaining on the clock. With the lead, the Lady Warriors passed the ball around to kill the clock, forcing Anahuac to foul Clymer. Clymer made one out of two shots to put Warren up 43-41.

The Lady Panthers inbounded the ball on Warren's side of the court with 1.6 seconds left, but could only find the side of the rim, giving Warren the win. Bell ended the night with 10 points and Foster with four. On Friday, the Lady Warriors traveled to Kountze to take on the Lionettes. Unfortunately, they were not able to come away with the win, losing 45-27. With the split, the Lady Warriors are now two wins against two losses in district play. Next up, JV and varsity will travel to Kirbyville on Friday January 12 and then be at home on Tuesday January 16; games starting at 5 pm.

Warrior Basketball– The Warriors hosted Anahuac last week as well, coming away with a 62-24 win. They would not be able to sustain that momentum as they lost to Kountze on Friday. In district play, the Warriors have one win against two losses. The upcoming schedule is the same as the Lady Warriors stated above.