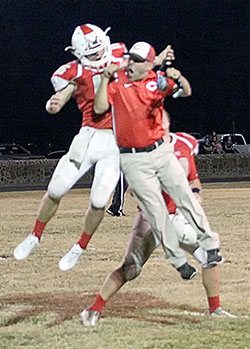 After nine days with no practice, a lack of time to work on special teams, Bulldog athletes had a short week of practice during which teams tried to cram 13 days worth of practice into three days.

The toughness and desire to win lead the Colmesneil Bulldogs to a win Friday, Sept 8.

Are the Bulldogs resilient, are they ready to be the team to get through those times of fear, fatigue, and backs against the wall? Those questions were answered as yes Friday night. On the last defensive play of the game the Bulldogs were up 18-14, Crossroads had the ball with 1:30 left on the clock.

It was fourth and eight on the 30-yard line. The ball was thrown to a slightly open receiver in the end zone.

At that point the Bulldogs had to make the choice to either give up, or be resilient and push through.

Junior Ryan Bray hit him and dislodged the ball to turn the ball back over to the Bulldogs.
"Through last night I was proud of our boys for overcoming everything over the last few weeks and finding a way to win. Be resilient, tougher, and never quit," Coach Ross McMurray said.
The Bulldogs have a game against Mt. Enterprise on Friday, Sept. 15.

Volleyball
On Tuesday, Sept. 5, the Lady Dogs played Timpson and the team struggled after being out of practice for a week.

With only two days of practice to regroup and work together, the Lady Dogs can back Saturday and dominated their first district game against Leggett.

The team played together and kept the errors to single digits —making Leggett earn their points.
The Lady Dog's seniors led the charge.

Nature Jackson dominated the net with multiple kills. Rylee Smith was flawless with her serves. Gabby Reynolds was the quarterback of the court with her sets to every player and Lindsey Dobbins ran the middle preventing Leggett from scoring.

Junior Emilee James, provided more power in the middle as well by constantly attacking the ball.
Colmesneil's Freshman and JV teams both competed in the Warren Tournament.
JV played some bigger and tougher schools and competed well.

The freshmen placed third in the tournament after beating Kirbyville.

The Lady's Dogs have a game on Friday, Sept. 15, against Goodrich on their home court.