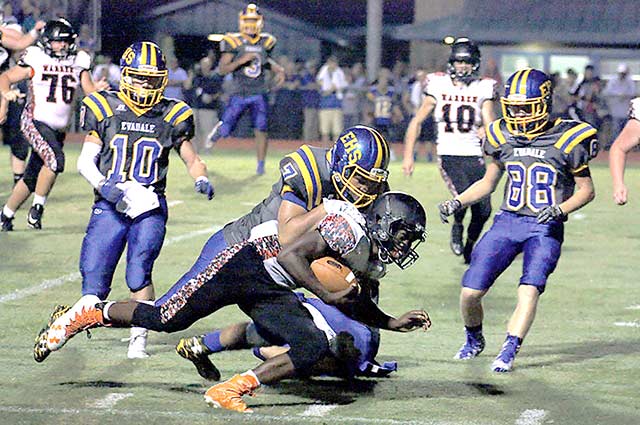 Hurricane Harvey may have disrupted lives over the past couple of weeks, but many fans around Southeast Texas were finally able to attend their first high school football game of the season Friday night.

Warren started their season off by visiting the Rebels of Evadale. Evadale passed early and often, scoring on their first drive with a 31-yard touchdown pass to take the lead 7-0 over Warren.
Evadale would miss a field goal on their next possession and then block Warren's punt to put them on the Warriors 20-yard line.

On the next play, Warren's Dylan McGallion picked off Evadale's pass, taking it 70 yards for the score to bring Warren within one at 7-6. Evadale did not go away from the pass however.
On their next possession, they started on their own 35, passing four times to get into the end zone and push the score up 14-6.

Warren would allow Evadale to score two more touchdowns, one rushing and one passing, before getting into scoring position with first and goal with a minute to go before halftime. The Warriors were unable to score as the pass was incomplete; finding themselves down 27-6 at the half.

In the second half, Warren went three and out on their next three possessions while Evadale tacked on another touchdown with a 10-yard pass as well as a 45-yard punt return to push the score up 40-6.

Warren would not quit, however, and scored two touchdowns in the fourth quarter — a two-yard rushing touchdown by Cameron Kojak and a 15-yard touchdown run by Michael Mouton to pull closer at 40-22 as time ran out in the fourth.

The Warriors will be in action Friday, Sept. 15 in Tarkington; game starting at 7:30 p.m.
Volleyball

It was tough week for the varsity volleyball squad as they fell to Diboll and then to Buna in five sets in the district opener.

The freshman had a good week though by winning their own tournament and then beating Buna in straight sets. Next up, the freshman and JV will travel to Liberty for a tournament on Thursday, Sept. 14 and Saturday, Sept. 16.