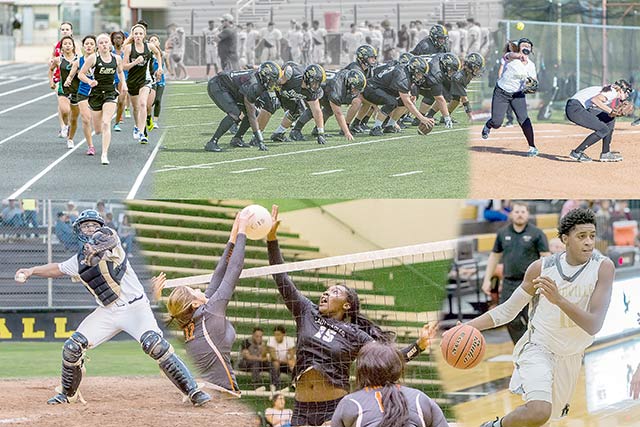 Student athletes learn important life lessons when they compete with a team. (Photo–illustration by Hale Hughes)

There is no doubt that school is a place for learning and while much is taught in class, there is a significant amount that is learned outside of the classroom, specifically the court or the field.

Athletics taught me a range of things, many of which became life lessons. These lessons aren't a part of any curriculum or on a list of mandatory common core elements that must be learned. They are experienced through effort, wins and losses, successes and failures, and I would like to share a few with you.

PARTICIPATION: Athletics is one of the first instances that individuals learn what it means to be a part of a team and to truly be a teammate.

One of the first things learned is the clear difference between participating and contributing.

You eventually learn that there is a common goal, and that goal is winning. The realization of this goal also teaches another valuable lesson of achieving that goal: practice, and lots of it. Success isn't given, it's earned.

That is a life lesson that's never forgotten. And while talent is appreciated, it's real effort that what is recognized. And it's not just the coaches who see it but teammates also see it. They also recognize the lack of it, and the true leaders of the team know how to call someone out for it and do so in a constructive manner.

TEAM: Teammates learn to bond over shared experiences, both good and bad. The bond between teammates is one that is similar to a friendship, but surpasses friendship in that it is typically more goal-oriented and the success of goals achieved and the devastation of missing or losing those shared goals links teammates even closer. Ask anyone who has ever won a state championship...in anything. There is a special blood transfusion that seems to occur when a team wins state and it's from that moment on teammates then become brothers or sisters for life. I've seen it first hand and it will continue to happen long after I am gone. This kind of bond teaches young athletes what it means to allow yourself to be vulnerable and generally creates friends for life.

HUMILITY/HUMBLENESS: Although winning is the goal as stated earlier, there will likely be an instance in which a loss occurs. It's inevitable and it should be experienced.

Being humbled with a loss is something everyone can learn from. It's not fun. It's not easy. It's heart wrenching and a necessary lesson of life. Knowing how it feels being on the losing end will also help athletes stay humble and decent following a victory and athletes learn to win and lose with grace, and will make them better people as they grow up.

FITNESS: For many people, being a part of school athletics is likely the most fit time of their lives.

I believe it's a good thing for individuals to know how what it means to be truly fit and how it affects their body.

I think it's a good thing for individuals to know their physical capabilities and limitations. It's also quite something to learn what it's like to impose your will physically over someone.

After all, that's essentially what sports are. Taking a set of goals, with predetermined rules and seeing which individual or team can use their skills to beat the other. It is typically within this realm that young people learn their best skillsets and what interests them the most, and will likely play a part in their decision making as they develop.

PRIDE: There is a pride that is taken when someone buys into their local sports program and that indescribable pride is another thing that I think every kid should feel a part of at least once in their lives. Representing someone other than yourself is something that athletics provides and in my opinion is something that should be experienced by everyone. There is a humility and humbleness that comes from representing your local school.

CELEBRITY: Not everyone will grow up to be a movie star or hero, but it's a special privilege to have your community cheer on local athletes and root for them.

Being recognized as a local athlete is another thing I think that helps secure a positive self-esteem in young people. Being noticed in your town, area, and in other rival communities is a tremendous coming of age lesson that helps and allows young people to manage their reputation and their character as they transition into young adults.

GOALS: Hinted at earlier, being an athlete initiates goal setting for people at an early age. When successful people are seen, what is likely seen is individuals who have set goals for themselves.

Goal setting is something that can be applied to just about any facet of life whether it be a career, relationships, physical, mentally or even spiritually oriented.

Learning to set goals is invaluable and athletics provides a tremendous opportunity to introduce them to young people.