Woodville's senior JuLisa will be headed to state for the fourth consecutive year in the shot put. This year Williams will be competing in both shot put and the discus. Williams competed first in the discus on Friday. Williams was the top seed entering the regional track meet held in Whitehouse with a throw of 114'3" at the district meet. JuLisa threw a personal and regional best 120' 5" beating out Garrison's Lacy Lee by nearly five feet. Saturday, JuLisa competed in the shot put. Williams threw 38'6" for her second regional championship in as many days. 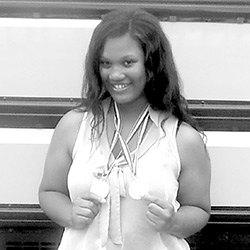 JuLisa Williams shows off her gold medals in the discus and shot put. Williams will represent Woodville at the AA State Championship meet in Austin.Williams was not alone competing in Whitehouse. Bethany Mitchell competed in the 400 meter run, Monique Moye in the 300 meter hurdles, Jordan Ogden in the 3200 and 1600 meter runs, Kayla Fontenot in the 1600 meter run, and Keandra King in the long jump. The boys were represented by seniors Charles Fentress in the 400 meter run and Phillip Noble in the 110 meter hurdles. Both Noble and Fentress placed sixth with times of 51.12 and 15.45 respectively.

The Woodville Lady Eagles advanced to the area round of the playoffs with an 8-0 drubbing of the Woden Lady Eagles. Both teams went three up and three down to start the first inning. Kenzie McGallion opened the top of the second inning with a line drive single to centerfield. McGallion advanced to second base on a sacrifice by Mallory Watts. Faith Sirmons singled to second base scoring McGallion giving Woodville the early 1-0 lead. Morgan Poncho doubled to left field with two outs to give the Eagles a 2-0 lead in the second inning. Ashton Weatherford, Avery Tolar, and McGallion reached on errors to advance Woodville's lead to 4-0 in the third inning. Poncho increased the lead in the fourth inning to 5-0 with a RBI triple to centerfield scoring Haley Tullous.

Woden opened the bottom of the fourth inning with a single to centerfield and a double to left field putting runners at second and third base with no outs. Shelby Mixon struck out the next batter and Katie Crenshaw caught a difficult line drive to right field for the second out. Shortstop Tamera White fielded a ground ball and threw to Poncho to end Woden's scoring opportunity. White opened the fifth inning with a homerun to left field to put the game out of reach for Woden.

Woodville finished the game with eight runs on eleven hits and no errors. Woden ended the games with zero runs on five hits and eight errors. Mixon pitched a complete game victory with no walks and eight strikeouts. The Lady Eagle will face Tatum in the best two out of three games series starting Thursday, Friday and Saturday if necessary at Pollock Central. Start time for Thursday and Friday is 7:00. p.m Saturday's first pitch is set for 1:00 p.m. if the teams split the first two games. Woodville is now 23-3 this season.