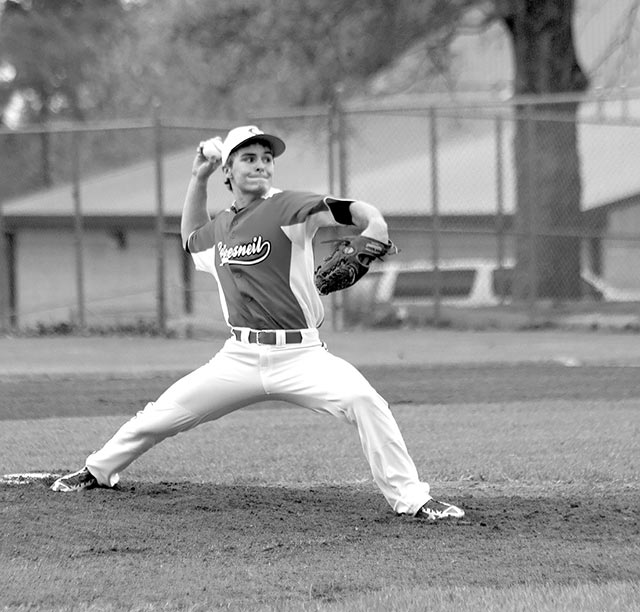 Kaleb Lindsey fires one in against Brookeland in the Bulldogs 19-4 victory over the Wildcats. Lindsey picked up the win while striking our four hitters. (Colmesneil Yearbook Staff photo)

Bulldogs Baseball
The Bulldogs are winding the district season down and they are picking up steam for a deep play-off run. On Tuesday, the Bulldogs hosted the Wolves from San Augustine. Matt Bailey took the mound for the Bulldogs. He made an early statement by mowing down all three San Augustine hitters. During the Bulldogs half of the first inning they left little doubt who the better team was by jumping out to a 7-0 lead. They continued to tack on runs throughout the next four innings in what would end up being a 16-0 shutout. Bailey continued to keep the Wolves hitter guessing on his way to picking up another win and striking out 13 on the day, while only allowing one hit. Dylan Falcon led the offensive charge by going 3-4 with a double and four RBI's. Chris Thedford in a stat line you do not see every day was 0-0 with four walks.

On Friday, the Bulldogs took on Brookeland and again Colmesneil dominated both offensively and defensively. Kaleb Lindsey got the start and kept the Brookeland hitters off balance while pitching three solid innings. He struck out four batters and only allowed three hits. Jake Pattillo came on in relief for the final two innings and continued to baffle the Brookeland batters while striking out four. Leading the offense during the game was Cody Walsh who had a huge night at the plate going a perfect 3-3 with four RBI's and scoring three runs. Chris Carr also went a perfect 3-3 batting while knocking in two more runs for the Bulldogs offense. When all was said and done the Bulldogs had rung up a 19-4 victory to improve to 19-5-1 on the season and 12-1 in district play.

The Bulldogs and West Sabine are currently tied for first place heading into the final district game of the season. If both teams win they will be Co-District Champions and will flip for seeding.
Lady Dogs and Bulldogs Track On Friday, April 25 and Saturday, April 26, Colmesneil competed in the Region III-1A track meet held at Palestine High School. The meet pitted athletes from the eight districts that compromise Region III competing for a trip to the state meet in Austin in their respective events. The top two finishers in each event advance to the state meet. The third place finisher in each event still has an outside chance of making it to the state meet. UIL will look at the third place finishers from each of the four regions and the third place finisher with the best time, jump, or throw for their event will make the state meet in their respective event as the "wildcard"entry.

Competing in the meet for the Lady Dogs were Magen Allen, Nikki Noble, Kara Standley, Treasure Jackson, Taylor Barker, and Alicyn Mitcham. Competing for the Bulldogs was Seth Cashat.

Competing for the Bulldogs was Cashat in the shot put. Cashat finished in 16th place at the regional meet.