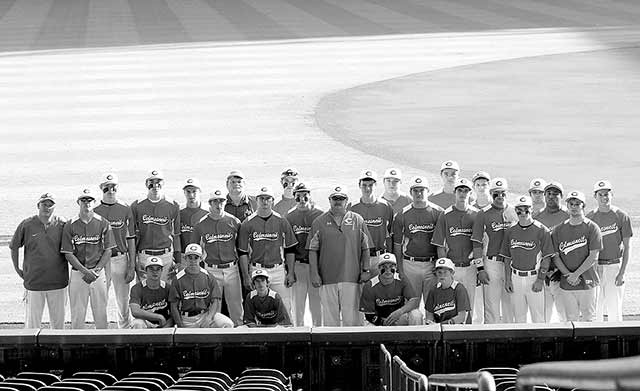 The 2014 Colmesneil Bulldogs baseball team on the field at Minute Maid Park before taking on district rival West Sabine.

Bulldogs Baseball This past weekend the Colmesneil Bulldogs and West Sabine Tigers baseball teams got the experience of a lifetime when they squared off at Minute Maid Park home of the Houston Astros. Unlike the last time these two met which was a pitcher's duel that Colmesneil won 1-0, this time they both decided to show their offensive prowess.

The Tigers started the game off by taking a 2-0 lead in the top half of the first inning, but Colmesneil struck back quickly putting four runs on the board and taking a 4-2 lead after the first inning. West Sabine managed to tie the game up in the second inning 4-4. The score would not change again until the top of the fourth when West Sabine took a 6-4 lead. Colmesneil would strike in the bottom of the fourth and take an 8-6 lead. The offensive display would continue for both teams, but unfortunately for Colmesneil they would come up short dropping the game 17-10. Kaleb Lindsey went 3-4 with a walk, Zach Bryan was 2-2 with three walks, Chris Thedford went 3-4, Dylan Falcon was 2-5, Cole Lowery was 1-2, and Zack Costellow was 2-4 with a walk.
Earlier in the week the Bulldogs took on Broaddus. The Bulldogs jumped on Broaddus quick with their bats offensively and defensively dominated them from the mound. Three Colmesneil pitchers combined for 12 strikeouts. Lindsey got the start and pitched four solid innings allowing no runs and striking out five. Matt Bailey came in and pitched two innings of solid relief while fanning five more batters. Finally, Lowery finished the game off by pitching an inning and striking out two batters.

Offensively the Bulldogs were led by Falcon who went 2-3 with a triple and he knocked in four runs. Chris Carr also had a hot bat going 2-2 and scoring two runs. With this win the Bulldogs improve to 17-4-1.

Lady Dogs Softball
The Lady Dogs took on West Sabine on Tuesday for senior night in a must win game for Colmesneil in regards to play-off seeding. The girls made sure they left no doubt who the better team was by dismantling the Lady Tigers 10-2 and sending the seniors out as winners in the last home game of their high school careers. Kara Standley took the mound and continued her stellar senior season picking up another win as she held the West Sabine bats in check while striking out nine and only allowing two runs to score.

Offensively, Magen Allen led the onslaught by smashing two towering solo homeruns. Also, going deep was Krista Harris who launched a two run shot. Merrick Graham hit a double and picked up an RBI. Destiney Kirkindoll knocked in a run on a hard hit single. Kim Knighten also picked up an RBI on a single. Standley smacked a double to help her cause out. And Treasure Jackson reached base on a beautifully laid down bunt.

The Lady Dogs finished the district season in second place with an 11-3 record and an 18-5-3 overall record. They will play the winner of the West Hardin/High Island play-in game in the bi-district round of the play-offs.

Lady Dogs and Bulldogs Track On Wednesday, April 16, Colmesneil competed in the area track meet held at Zavalla. The meet pitted athletes from District 23-A and 24-A competing for a trip to the regional meet in Palestine in their respective events. The top four finishers in each event advance to the regional meet.

After a tough day of competing the Bulldogs and Lady Dogs both had athletes qualify for the regional meet. Qualifying for the Bulldogs was Cashat in the shot put. Qualifying for the Lady Dogs were Noble in the high jump, 100 meter dash and 200 meter dash, Jackson in the long jump and triple jump, Barker in the discus and 400 meter run, Mitcham in the 3200 meter run, and the 4x100 sprint relay team of Noble, Standley, Jackson, and Barker.

The Bulldogs had two players named to the Texas Association of Basketball Coaches Academic All-State Team for the 2013-2014 School Year. Kolton Bass and Cole Lowery were both named to this prestigious team. This recognition is only available to seniors. They must have maintained at least a 92 overall average their first seven semesters of high school. Congratulations to these two great student athletes.