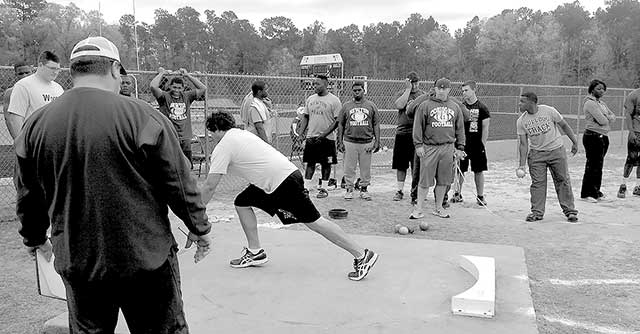 The Woodville Eagles hosted the preliminary round of the District 20-AA track meet Monday at Eagle Stadium. District 20-AA is composed of teams from Woodville, Warren, Newton, Corrigan-Camden, Deweyville, Kountze, Hemphill and Kirbyville. Monday's round included the finals in field events, and the 3200 meter run. The top two finishers in each event advance to the regional track meet held in Whitehouse on April 18-19.

JuLisa Williams won district for the third straight year in the shot put with a throw of 40'7". Williams was also won the gold medal in the discus. Crailee Battise threw the shot put 29'6" for sixth place. Keandra King finished the district runner-up in triple jump with a leap of 34'7.25". Makala Kibble jumped 32'1.375" for a sixth place finish. Bethany Mitchell earned the bronze medal in high jump by clearing 4'6". Victoria Scoggins vaulted six feet earning her a fourth place finish in the pole vault. The Lady Eagles found their greatest success Monday in the 3200 meter run. Jordan Ogden and Kayla Fontenot finished first and second respectively with times of 13:44 and 13:55. Audrey Brookshire ran a time of 14:35.7 for a fifth place finish. Woodville had the highest point total heading into the finals.

The boys had several successes as well in the field events and the 3200 meter run. Miguel Falcon finished third in the shot put with a throw of 40'7". Aaron Garess placed fifth in the pole vault clearing 9'6". Bobby Swien completed the 3200 meter in 12:21.79 for a third place finish, while Dalton Rhame finished sixth with a time of 12:42.95.

The Woodville Lady Eagle softball team defeated Warren 15-0 last Thursday and Kountze 12-0 Friday night, increasing their record to 20-3. Woodville will travel to Hemphill on Friday and are looking forward to a rematch against Deweyville on Tuesday in Woodville.

The Eagles had less luck against the Warriors in the 11-6 defeat. The loss drops the Eagles to 9-9-1 on the season. The Eagles will travel to Kirbyville on Friday, before taking the field on Tuesday against Corrigan-Camden.