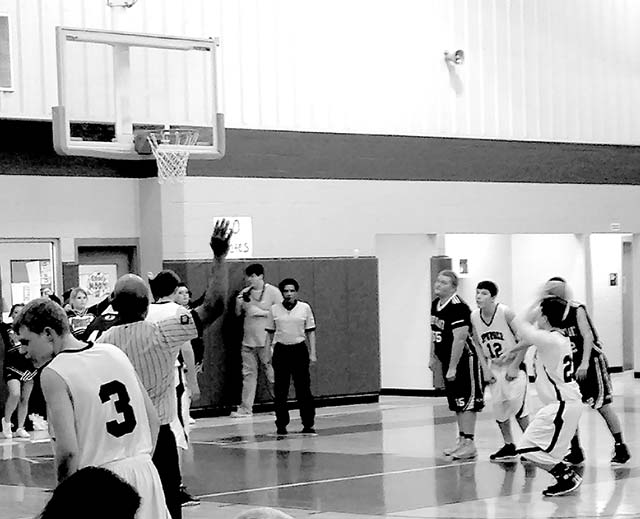 On Tuesday, February 11, the Spurger Pirates defeated Burkeville for the third place spot in district, to make the playoffs. Both teams fought competitively, and sent the game into overtime.

Both teams started out atrociously slow with no points on the board, until two minutes left in the first quarter when Spurger's Pilgreen made a two-point put-back. LeBouef followed Pilgreen shortly after with a three-pointer to end the quarter. In the second quarter, the team woke up and put some points up. Pilgreen finished the half with four points after knocking down a two-point jumper.

Cody Winkle and Hyden both hit a three-pointer, along with LeBouef who made another which gave him six points for the half. Sheffield also scored six points with a free throw, two-point jumper, and a three-pointer. For the second half, the boys put up many more points, and played competitively, but so did their opponent which sent the game into overtime with a score of 43-43.

Nerves were shaken when Burkeville won the tip off, but the Pirates pulled through. Both Pilgreen and Sheffield drew fouls to make free throws and keep the Pirates in it. Cody Winkle put up a three- pointer, followed by Sheffield's one, which gave the Pirates a three point lead. Burkeville went up for a buzzer beating three-pointer, but Sheffield blocked his shot. Spurger then walked away with a winning score of 52-49. Caleb Winkle finished the game with 11 points, one steal and four rebounds, and Pilgreen had eight points as well as eight rebounds. Cody Winkle gave six points and came away with two rebounds and a steal. Hyden also had one steal, as well as one rebound and three points. Sheffield accumulated 18 points, 15 rebounds, two blocks and a steal.

They will be competing in this year's playoffs with hopes of going far, so be sure to support your Spurger Pirates.