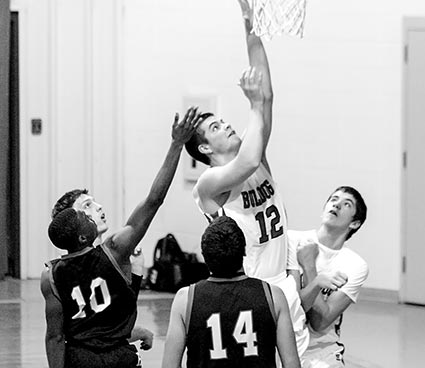 Bulldogs fight off Bobcats
On Tuesday night, the Bulldogs took on the Bobcats of Hull-Daisetta in a key district game for both teams positioning for a play-off spot. The game started off with both teams pressing defensively and creating some easy scoring opportunities for their respective teams. Throughout the first quarter the game was back and forth with neither team taking a commanding lead, but Hull-Daisetta was able to win the first frame 15-11. Colmesneil regrouped during the intermission between quarters and came back out refocused and determined to take the fight to the Bobcats. The Bulldogs exploded for 22 points in the quarter, led by the strong inside play of Cole Lowery who scored eight of his team high 20 points during the second quarter. Defensively the Bulldogs stepped up as well holding Hull-Daisetta to 12 points in the quarter to take a 33-27 lead into halftime.

The third quarter continued the high scoring efforts by both teams. Colmesneil matched Hull-Daisetta basket for basket throughout the period as neither team could make a long run and take complete control of the game. When the buzzer sounded for the end of the third quarter the Bulldogs had extended their halftime lead to eight with a 52-44 advantage. The fourth quarter was not quite as high scoring, but Colmesneil was able to answer any run that Hull-Daisetta tried to put together. Tyler Walker led the Bulldogs in the fourth quarter by scoring seven of his 15 points on the night in the final frame. As the horn sounded for the end of the game, the Bulldogs had triumphed over the Bobcats of Hull-Daisetta 67-56 to improve their district record to 3-1 on the season. "We battled through and played with some tenacity and got the victory. We find ways to win," Coach Clint Stephens said.

Contributing to the scoring along with Lowery and Walker were Chris Carr with four points, Tayler Walker with six, Hayden Langston with four, Matt Bailey with 12, and Dylan Falcon with six. Some other key stats were Cole Lowery with 23 rebounds on the night, Tyler Walker with five rebounds and three assists, Kolton Bass with two assists, Matt Bailey with three 3-point baskets and three assists, and Dylan Falcon with two assists.

Lady Dogs put game away early versus Lady Bobcats
The Lady Dogs entered the night with one goal and that was to beat Hull-Daisetta and send a message to other teams that they want to make the post season again. The Lady Dogs came out from the jump ball determined and it showed as they quickly jumped out to a 12-0 lead before Hull-Daisetta called a time-out to try and settle their players and get Colmesneil out of rhythm. However, the strategy did not work for Hull-Daisetta as Colmesneil continued their defensive onslaught. At the end of the first quarter the Lady Dogs had blitzed the Lady Bobcats 26-0, led by Taylor Barker's 15 points in the quarter. At the start of the second quarter the Lady Dogs called off their full-court press, but continued to excel offensively as they opened up a 35-0 lead. From this point on the Lady Dogs stressed hard work at the defensive end of the court and worked the ball around at the offensive end. Going into halftime the Lady Dogs were up 35-6.

The second half was a half where the Lady Dogs continued to focus on their defense as Hull-Daisetta continued to struggle against it. The third quarter ended with Colmesneil holding a comfortable 41-11 lead. The fourth quarter lacked a lot of offense, but when the final buzzer went off the Lady Dogs were victorious 44-16. "We had talked about the importance of this game for several days. I couldn't emphasize enough that we needed this win. I told them before the game, go out there and make the game boring by putting them away early. And they did just that. The first quarter was arguably the best quarter we have played all season in terms of defensive rotation. I am so proud of their effort and the heart they played with tonight," Coach Sluga said about the victory.

The Lady Dogs were led by Treasure Jackson with 20 points. Jackson knocked down a career high four 3-pointers in a single game tonight as well. This was Jackson's first extended playing time since suffering a minor injury against Hull-Daisetta earlier in the month and re-aggravating it against West Hardin. Taylor Barker had 17 points on the night, Krista Harris had one, Magen Allen had three, and Merrick Graham chipped in three as well.