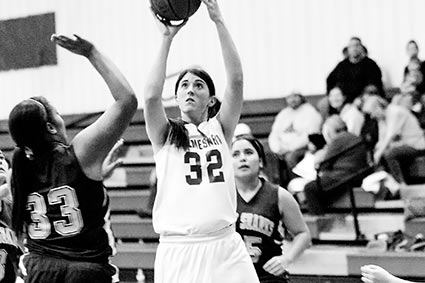 Taylor Barker going up for two of her over 1000 career points against Sabine Pass on January 14. (Colmesneil Yearbook Staff photo)by Michael Patrick

Taylor Barker Surpasses 1000 Points for Career
On January 10, Taylor Barker scored 20 points against West Hardin pushing her career total over the 1000 point mark. She currently has 1026 points for her career and shows no sign of slowing down. She has averaged 19.4 points per game through 53 games in her high school career. This season she is averaging 20.4 points per game and has scored 449 points on the season through January 14. Last year as a freshman, she scored 577 points and averaged 18.6 points per game. Barker is Coach Sluga's first 1000 point scorer of his coaching career.

"This is a tremendous accomplishment for Taylor. It is scary to think what she will have accomplished by the time her high school career is over. This is a testament to her hard work, hustle, and determination she plays every game with," Coach Patrick Sluga said about the accomplishment.

Lady Dogs defeat Sabine Pass
The Lady Dogs took on the Lady Sharks of Sabine Pass on Friday, to end the first round of district play. The Lady Dogs came out of the gates slow and sluggish as they just could not find the bottom of the net during the first quarter. But, with their defense picking up the slack they ended the first quarter up 5-2. The second quarter started off slow as well for Colmesneil. Coach Sluga, looking to get some life in the offense subbed Treasure Jackson into the game for a spark. She made an immediate impact getting a steal and a lay-up. The Lady Dogs responded by going on a 10-0 run to end the quarter and went into halftime with an 18-5 lead.

The fourth quarter was much friendlier to Colmesneil's offense, as they got into a rhythm much like they had late in the second quarter. Krista Harris stepped up and scored six of her 11 points on the night in the fourth quarter to help keep the Lady Sharks at bay. The Lady Dog defense stepped it up another notch as they held Sabine Pass to only two points in the fourth quarter as well. When the final buzzer sounded the Lady Dogs were victorious 33-13. "This was one of those nights where our defense had to step up and perform, because we just did not have it offensively. You're going to have nights like that. But, I am proud of the girls for not getting frustrated and going out there and getting the W," Coach Sluga said.

Contributing to the scoring tonight along with Harris were Merrick Graham with four points, Alexis Follmar with one, Barker had nine and Jackson eight.

Bulldogs beat Sabine Pass in OT
The Bulldogs took on the Sharks in the final game of the night. This game was back and forth throughout the night. The Sharks of Sabine Pass jumped on the Bulldogs quickly in the first quarter. But, the Bulldogs did not lie down and kept the game close only trailing 11-9 at the end of the first frame. The Bulldogs regrouped in between the first and second quarters and it showed as they took over the game and the lead, with Tyler Walker leading the way with six of his game high 22 points in the second quarter. But, the Sharks would not go away as they only trailed by four at halftime 22-18.

The Bulldogs picked up where they left off in the third quarter. Tyler Walker again led the team in scoring with another six points and the Bulldogs stretched their lead to a game high 10 points and were in control of the game.

With what many in the stands thought was a knockout punch in the third quarter, the Sharks came out on fire in the fourth and stormed back to take a 40-39 lead over the Bulldogs. The lead would change hands several times over the last few minutes of the game. The Sharks were up by four with less than 20 seconds left in the game and looked ready to steal a victory. But, Tyler Walker took control and was able to get two keep lay-ups in the final seconds to tie the game at 48-48 and force overtime.

During overtime, Walker fouled out early, but Cole Lowery took control for the Bulldogs muscling in 10 of his 17 points and snatching the victory from Sabine Pass. Colmesneil prevailed 58-54 in a very intense and exciting game. "Tyler Walker controlled the game from outside-in and Lowery controlled it from inside-out. But, an ugly win is better than a pretty loss," Coach Clint Stephens said.

Also, getting into the scoring for the Bulldogs were Matt Bailey with four points, Dylan Falcon with five, Hayden Langston with one, Kolton Bass with three, and Tayler Walker with six points.