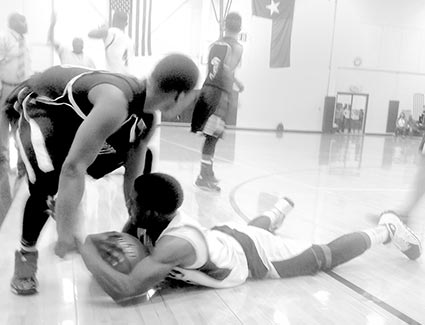 The Woodville Eagles bounced back after its 0-2 start to get back in the play-off hunt. The Eagles won two of three games to improve their record to 7-10 and 2-3 in district. Woodville defeated Hemphill 80-31 and Deweyville 77-41 before facing Kirbyville Friday night in Woodville.

Woodville looked like it was going to continue the streak outscoring the Wildcats 18-10 in the first quarter. Kirbyville continued to chip away at the lead and eventually took the lead in the third quarter. Woodville and Kirbyville fought back and forth, but it was the Wildcats that eventually won the game 49-45. The loss makes the Friday matchup against the Warren Warriors a big game if the Eagles want to return to the play-offs this year. Marqui Jackson led the Eagles with 13 points. Ashton Lockhart scored eleven and Jamal Horn added seven. Six of Jackson's 13 points came off of the three point shot. Lockhart and Horn shot seven for eight from the free throw line for a combined 87.5%. Ivan Lockhart and Reggie Williams each pulled down six rebounds, while Lockhart dished out two assists. Horn picked up the defensive pressure by forcing six turnovers.

The Lady Eagles remain undefeated in district (7-0) with a 50-19 win over the Lady Cats.
The Eagles and Lady Eagles will host Warren Friday night and travel to Kountze on Tuesday. The middle school teams will be in action Thursday night against Kountze. The girls will be home, while the boys will be away. This will be the final regular season game of the year. The district tournament will be held January 23 and 25. The girl's tournament will be held in Woodville, while the boy's games will be played in Kountze.