Yellowjacket Basketball
The Yellowjacket offensive strategy worked to perfection on Tuesday night, when the Jackets pulled a 74-21 win over the Goodrich Hornets. The boys came out confident about the game, and were ready to play. The jump ball went up and JJ Cowan got the tip of to Kris Kuehn as he scored the first of many Yellowjacket points. The Yellowjackets continued to call the shots both offensively and defensively to dominate the ball game. Cord Neal and Colten Martin led a balanced Yellowjacket attack to break open the game. Neal led the Yellowjackets with 31 points, Martin with 14 points, Kuehn with 10 points, Carlos Berry with six points, Cowan had five points, and Levi Watts and Clay Thomson both with four points. "The guys played really well. We scored the most points that we have scored in a long time here in Chester and I was pleased with our shot selection. We can always play better on defense, but we are young and a lot of those mistakes were based on inexperience. We also played a lot of man defense which is something that we do not do a lot, but the match ups were in our favor. The seniors that played tonight had not gotten a win in their senior careers, but tonight that drought ended and I am happy for them that they got to experience a victory. We look forward to many more in the future," commented Coach Fudge. The Yellowjackets fell to Spurger 60-17 on Friday, January 10.

The Lady Jackets and Yellowjackets face Beaumont Legacy on January 17 and Premier Academy on January 21. 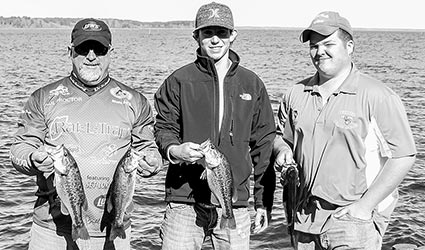 Chester fishing team places third in Toledo Bend tournament. Pictured are: Boat Captain Paul Proctor, Keaton Whitworth and Cody Riley.The Chester fishing team placed third in the Toledo Bend fishing tournament this past Saturday. There were a total of 51 teams that fished the windy waters of Toledo Bend. Anglers Keaton Whitworth and Cody Riley caught four fish for a total weight of 7.26 pounds. Their next tournament will be on February 1 on Lake Sam Rayburn.
The Chester Athletic Booster Club will host their annual faculty versus alumni basketball game and wild game supper on Saturday, January 18. The game will begin at 4 p.m. All graduates of Chester ISD are invited to play. Player entry fee is only $10.00 and gate fee is only $1.00 per person. A silent auction will be held during the wild game supper. Several items will be up for bid such as an iPad Mini, Xbox 360 game console, fish fryer, and many other great items. All proceeds help with the purchase of new uniforms.
Email: This email address is being protected from spambots. You need JavaScript enabled to view it.