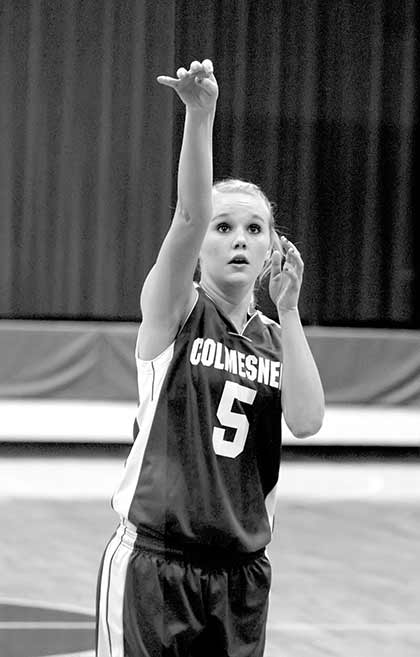 Girls Varsity Basketball
The Lady Dogs traveled to Hull-Daisetta on Friday to take on the Lady Bobcats in the district opener for both teams. Colmesneil struck the first blow by jumping out to a quick 6-0 lead with some great pressure defense and hot shooting. The Lady Dogs controlled the first quarter 13-7 behind the hot hand of Treasure Jackson who had six points in the opening frame. The two teams battled back and forth throughout the second period. However, early in the second quarter Jackson collided with another player going for a loose ball and fell hitting her head on the floor. She would not return to the game, she scored nine points in a little over one quarter of play. This was a big blow to the Lady Dogs having lost their floor general for the rest of the game.

So Colmesneil dug their heels in and got ready for a battle. The second quarter ended with both teams scoring eight points, but Colmesneil held a 21-16 edge at half. The third period saw the Lady Dogs stretch their lead to 30-20 with some great team work. Haleigh Belt picked up an assist with an amazing back door pass to a cutting Taylor Barker who converted the pass for two of her team high 20 points on the night and gave the Lady Dogs a 26-18 lead. Hull-Daisetta would not go away though. During the fourth quarter, starting post Krista Harris fouled out halfway through the fourth. She played some tough post defense and had some key steals and rebounds throughout the game. Barker kept attacking the basket and was able to get to the free-throw line and knocked down some clutch free-throws after Hull got as close as four.

With the Lady Dogs up by 10, Hull-Daisetta banked in a three-pointer to cut the lead to seven. Shortly after that basket by Hull-Daisetta, Barker fouled out with about a minute and a half left in the game. The Lady Dogs did not lie down though; they scrapped and fought until the final buzzer, taking a key road victory 41-34. "At half we refocused, told the girls they were going to have to step up because Treasure was not coming back tonight. We felt Hull would come out and pressure the ball more in the second half, with Treasure out.

The girls did a great job of stepping up to the challenge. Madison and Merrick did a great job of helping Taylor with the ball handling. Alexis came in late and helped too. This was a great win for us, I am extremely proud of the girls for their efforts and making sure we did not let the game slip away," Coach Sluga said. Contributing to the scoring along with Jackson and Barker were Belt with six points, Harris with two, Megan Allen with two, and Madison Newcomb with two.

Boys Varsity Basketball
Over Christmas break the Bulldogs took on the Hemphill Hornets. From the opening tip of the game the Bulldogs were on fire. They dominated Hemphill throughout the opening frame leading 29-5. The Bulldogs continued to dominate during the second period taking a 41-26 lead into halftime.

During the second half, the Bulldogs continued to play hard and were able to get some young players some quality playing time as they cruised to a 65-49 win. The Bulldogs were led by Matt Bailey with 18 points, also contributing to the team effort were Taylor Walker with 10, Tyler Walker had eight, Jermany Wooten with eight, Dylan Falcon with six, Chris Carr and Kolton Bass both had four, Hayden Langston had three, Hunter Vaughn and Blaine Turner each scored two. This game saw all 10 Bulldogs who played score, so it was a well-balanced game for Colmesneil.
The Bulldogs traveled to Burkeville to play the Mustangs on December 30.

The short manned Bulldogs got off to a slow start during the first quarter and found themselves trailing 12-6. The Mustangs continued to widen their lead as the second quarter came to an end leading 31-18 at the half. However, the Bulldogs came out fighting in the third quarter and chipped away at the Mustang lead and got it as low as three points and found themselves trailing 31-41 going into the fourth. The Bulldogs continued to fight, but when the final buzzer sounded they came up short 51-59." The boys played with a lot of pride and showed a lot of determination and resolve to battle back in the second half," Coach Stephens said. Tayler Walker led the Bulldogs with 22 points, Dylan Falcon had 12, Matt Bailey had 10, Chris Carr chipped in five, and Jake Pattillo had two to round out the scoring.

email: This email address is being protected from spambots. You need JavaScript enabled to view it.