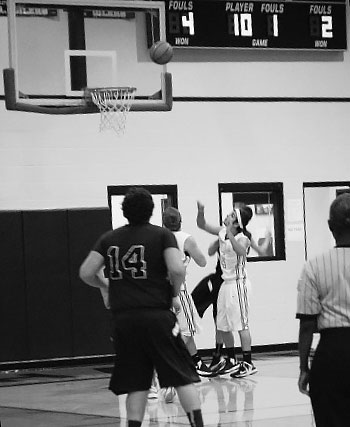 On November 21-23, West Hardin held their annual varsity basketball tournament. The Pirate's girls and boys have participated in the tournament, successfully, for the past two years. Last year, the Lady Pirates took consolation and the Pirates won first place. This year the boys beat West Hardin for the third place trophy.

The Pirates started out strong against the Deweyville Pirates, as their first game of the tournament, with a win of 43-33 to place Spurger in the winner's bracket. Their next game was a tough one facing the 3A Liberty Panthers. The Pirates had a hard time recovering from turnovers and shots were not falling in Spurger's favor. On Saturday, November 23, the Pirates played the West Hardin Oilers, for the third place trophy. Spurger came out ready to win and make up for their slack the previous day. Although it took a while for shots to fall for Spurger, they kept the lead by excessive steals made by Cody Winkle, Cory Hyden, Caleb Lebouef, Austin Ross, and Nathan Sheffield. Half time ended closely with Spurger up 27-23. Senior, Cody Winkle, led the team in points for the half with 11 points, which were made up of three 3-pointers and two made free throws. Caleb Winkle had nine points for the half, all of which were three-pointers, followed by Nathan Sheffield who had six points, which were two 2-point range shots and two free throws. Several assists by Dave Pilgreen, Lebouef, and Ross played a vital role as well. By the fourth quarter, the intensity was high between the players. Two of the Oiler's players fouled out and one received a technical foul which gave the Pirates a positive momentum. LeBouef then shot four free throw shots for the foul and technical and made three of the four to set the Pirates further ahead. With West Hardin down, Spurger then took the win, with a score of 51-45. Sheffield and Cody Winkle both led the team with 12 points. Caleb Winkle and Pilgreen followed both with nine points. Ross contributed four points, followed by LeBouef, who had three. Heith Zoch made a 2-point range shot for the Pirates and Cody Oliver made a free throw.

The Lady Pirates and the Pirate's junior varsity and varsity boys will be playing again on December 3 at Baytown Community Christian at 6 p.m. The junior high eighth grade boys and girls will be playing in Chester starting at 4:30 p.m.