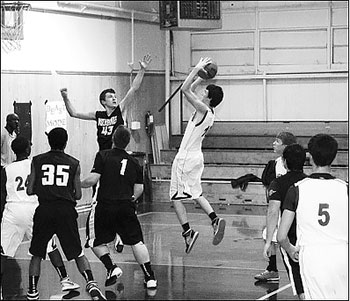 The Chester Yellowjackets and Lady Jackets basketball teams participated in the West Hardin basketball tournament this past week.
Ladyjackets

The Lady Jackets took two losses before winning their final game of the tournament. The first round game for the Lady Jackets was against Onalaska. Chester fell 38-28. The scorers for the Lady Jackets were Timber Wright with ten points, Laken Read with six points, and Jaci Davis with three points. Maddie Read, Destiny Kuehn and Tyra Adair all added two points and Alexis Paire chipped in one point.

The Lady Jacket's second round opponent was Deweyville, who beat the Lady Jackets 23-20 with a three point shot in the last four seconds of the game. Though the Lady Jacket defense was strong, the offense just could not get going. Wright led Chester with six points while Maddie Read and Laken Read each added four points. Other contributors for the Jackets were Kyrstin Jobe, Kuehn and Adair, each with two points.

What the Lady Jacket offense did not do in the second round game, it did in the final round. Chester beat Spurger, who is in the Lady Jackets district, 48-29. Maddie Read led all scorers with 13 points. Laken Read scored 11 points, followed by Adair with ten and Wright with nine. Davis and Jobe also added two points and Kuehn added one point.

"For whatever reason, I have been told since I arrived in Chester that our girls just do not perform well in tournaments. To me, that is just absolutely unacceptable. Our coaching staff is doing our best to rebuild a winning tradition in Chester. We have heard so much about all the great teams of the past, and we want to re-establish that as the "norm" here in Chester. I am hoping that the final game of the West Hardin Tournament is one of the first steps in that process. We have a great group of girls and once we can get them to see their potential, I believe this community could be in for a real treat," added Coach Hall.

The Yellowjackets began tournament play on Thursday against Trinity ISD.
Trinity was a tough draw for the Jackets in this tournament. They kept it close in the first quarter; with two minutes left, the teams were tied 7-7. The Yellowjacket seven player disadvantage gave Trinity an advantage and they eventually were able to wear the Jackets down and force their young players to make some mistakes. Kris Kuehn was the leading scorer with eight points. The Yellowjackets lost 81-23.

The Yellowjackets faced Deweyville in their second game. The Jacket team consisted of just the six freshmen. The Jackets were able to hang with them in the first quarter as the score was 6-9 in Deweyville's favor, but the freshmen did not have enough stamina or experience to last over the long run. They made many mistakes in the back court, and allowed many turnovers against their press. The Jackets also missed too many free throws. Ultimately the Yellowjackets lost to Deweyville 58-13.

The leading scorer for the Jackets was Cord Neal with seven points. "I was very pleased with the effort this young team displayed" comments Coach Fudge.

Saturday's game against High Island was rough from the beginning. This young Yellowjacket team was not ready for the pressure or demands of a varsity game. Neal led the Jackets with 13 points.
Although these under classmen did an excellent job, the Cardinals dominated 69-24.