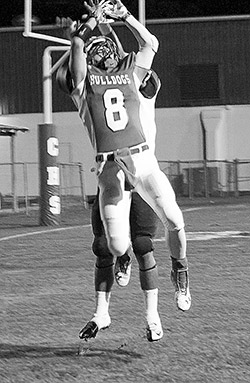 Last Friday, Colmesneil played what fans say was the best high school football game they have seen in a long time. For the first time all season, the 8-0 Bulldogs fell behind to Iola and went into halftime on the bottom. The team came back with a vengeance to take their ninth victory. "The kids played hard and never stopped fighting," said Coach Fancy Johnson. With exciting rushing touchdowns by Matt Bailey, Cody Walsh, and Chris Carr, followed by three two-point conversions by Bailey and Walsh, Colmesneil put 24 points against Iola's 22 by the fourth quarter. With six seconds left in the game, Iola put themselves in the perfect position to score and steal the win, but the talent on the defensive line backed by a fan support Colmesneil has never seen, the boys held their opponents and celebrated their 24-22 victory with friends and family just moments after the final second disappeared. "Our backs were against the wall, and the kids persevered," said Johnson. "When you are disciplined and you truly work hard and practice like it is a game Monday through Thursday, winning is that much more important to you, and that is what we are doing here in Colmesneil." During the fight between Bulldogs, outside linebacker Harrison Brown ended his season with a severe back injury, but he expects to be back on the field with his team next year and continue to contribute to another successful season for Colmesneil.
Zack Bryan led his team on defense with 13 tackles and nine assists, followed by Walsh with 14 tackles and four assists, Carr with seven tackles and 10 assists, Dylan Falcon with eight tackles and four assists, and Garrett Wheat with six tackles and four assists. Walsh, Bryan, Wheat, and Hayden Langston each forced a fumble recovered by Carr, Walsh, and Langston. Leading the team offensively was Walsh with 16 carries for 153 yards, Carr with two carries for 42 yards and one catch passed by Bailey for 46 yards, and Waylon Whitley with eight carries for 27 yards.
This Friday, the team will travel to Hull-Daisetta to battle for the District Championship and an undefeated season. "Hull-Daisetta is well coached and very physical," said Johnson. "It is going to be a dogfight for 48 minutes, but we have a great game plan and feel we have a great opportunity to bring Colmesneil a district crown." The game will begin at 7 p.m. Please plan to attend and cheer your Bulldogs on to a perfect season. Bring any noise makers and white hand towels to help create a "sea of white" to support defense and celebrate touchdowns.