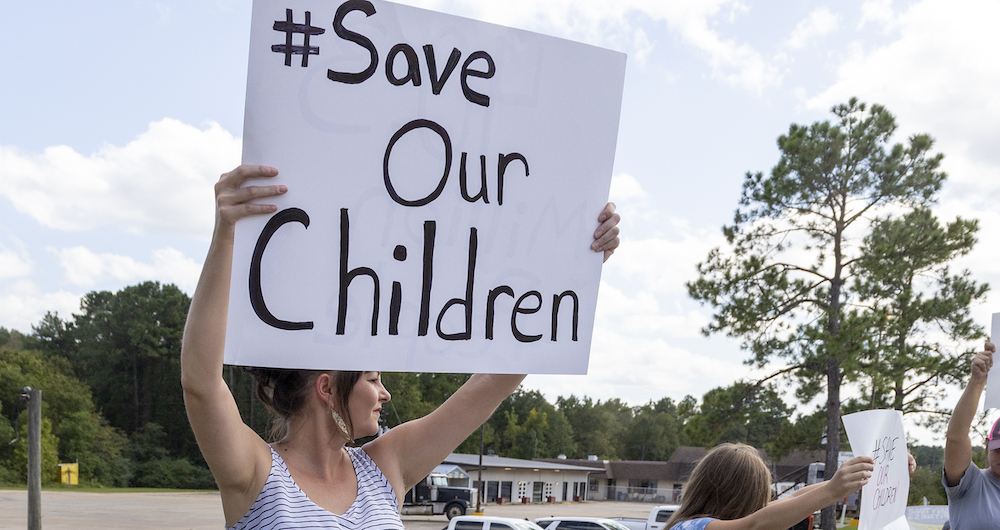 JIM POWERS | TCB Participants marched in an event to raise awareness of sex trafficking on Sunday.

WOODVILLE – A group of Tyler County residents gathered in the parking lot of the former Stage department store on Sunday afternoon to march through town. The cause behind the event was one that has received a great deal of attention recently: sex trafficking.

Rachel Lea Valentine, who organized the event, said that the march was done to bring awareness to the issue, and to educate the public on “how we can all be a voice for victims of this form of modern-day slavery.”

“I am so proud of our community and the support from all of the people who showed up and spoke up,” said Valentine.

The proceeds raised from the event went toward the organization known as Operation Underground Railroad, which works to combat sex trafficking and also rehabilitates rescued victims.

The impetus to organize such an event came from working with abused children, Valentine said. She also mentioned that the frequency of which sex trafficking crimes are reported through various forms of media provided a window of awareness to the issue on a global scale.

“I’ve worked with kids for a long time; kids that have been abused sexually, emotionally, physically. Working with kids has always been my passion,” she said.

Valentine said that although she was proud of the event and those who participated, it was "tainted" by the city not allowing vendors.

"We met all the factors, so we're not understanding why [Woodville Mayor Paula Jones] shut down our vendors," Valentine said.

The factors Valentine referenced are the criteria issued by Gov. Greg Abbott pertaining to outdoor events with regard to the ongoing efforts to curb the COVID-19 pandemic.

Jones said that upon reviewing the planned event and Abbott's most recent order, it was determined that the event should be treated as a large-scale outdoor event. "Aside from a request for traffic control, the city received no formal request or notification regarding the event, which is clearly prohibited by order GA-30," Jones said. The executive order Jones referenced was updated by Abbott, and issued on Sept. 17.

Jones added that her consideration of the event was done in a similar manner to the Dogwood Festival, which was postponed until June this year, "with the same conditions to maintain consistency and fairness," i.e. with mask and social distancing requirements and the no vendors restriction.

Valentine said she and others involved with the event are still confused by the decision to not allow vendors. “We planned everything for a noble cause so to deny us this when it was perfectly allowable leaves us scratching our heads,” she said.

Jones cited the text of Abbott’s order pertaining to gatherings in excess of 10 people, which are prohibited unless the mayor of the city in which the gathering is held approves of the gathering, and such approval can be made subject to certain conditions or restrictions not inconsistent with the statewide order.

Valentine said that in the future she plans on doing a similar event in Conroe, and added that if anyone else is interested in hosting such an event, they can do so outside of the city limits.

“Our county judge has the exact same powers in Tyler County [outside of the city limits] and allowed the food vendor we had [on Sunday] to set up right outside of Woodville city limits,” said Valentine.

The results from a study released in 2018 from the United Nations' International Labour Organization estimated that 3.8 million adults and one million children were victims of sex trafficking in findings from the year 2016, internationally.

From that study, 99% of those victimized were reported as women and girls, although men, boys, trans, intersex and non-binary individuals were also victimized.

There is no official up-to-date estimate of sex trafficking victims in the United States at present, but according to the Centers for Disease Control, about one in four girls and one in 13 boys experience sexual abuse at some point in childhood.

If you believe you may have information regarding a trafficking situation, call the National Human Trafficking Hotline, toll-free at 1-888-373-7888, or visit the website www.humantraffickinghotline.org/chat to submit an anonymous tip.