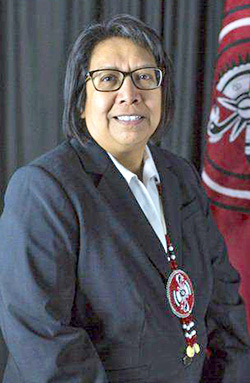 Flores, who serves as the Tribal Council Chairperson for the Alabama-Coushatta Tribe, said she is dedicated to providing opportunities for the region’s residents to gain cultural knowledge, economic prosperity and an improved quality of life for both the tribe and its neighbors.

She is a United States Air Force veteran. She served from 1981-86 on American and German bases. After her USAF discharge, she earned a degree in Environmental Science from Haskell Indian Nations University in Lawrence, Kansas. She has worked in the field of environmental protection for more than 25 years.

In addition to her role as Tribal Council Chairperson, Flores has worked with the tribe’s armed services veterans’ programs to help acknowledge and honor tribal members who have served in the military.

The naming of the Mr. or Ms. East Texas award recipient has been a Dogwood Festival tradition since 1967, when O.R. Crawford, the general manager of Northwestern Timber Company, was named the first Mr. East Texas.

Past recipients through the years have included such notables as Arthur Temple, Gov. Price Daniel, Rep. Charles Wilson and Dr. James “Red” Duke.

According to the directors, the award is presented to an East Texan who best exemplifies “the spirit and quality of leadership which advances, shapes and gives direction to the growth and progress of East Texas.”

District Judge Delinda Gibbs Walker was named Ms. East Texas for 2019. Flores joins another tribal member who was honored with the award, the late Chief Oscola Clayton M. Sylestine, who was named Mr. East Texas in 2009.

This year’s rescheduled Dogwood Festival will take place on Saturday, June 13. According to operating director Leann Monk, all systems are a “go” for the traditional Queen’s Weekend activities, including the historical play, Kingsmen’s Ball and coronation of the Dogwood Queen.

In other Dogwood-related news, this week begins the Booster’s series of special commemorative sections dedicated to the festival. Be sure and check out the inaugural installment, which spotlights the princesses, children of the court and trainbearers inside this issue.