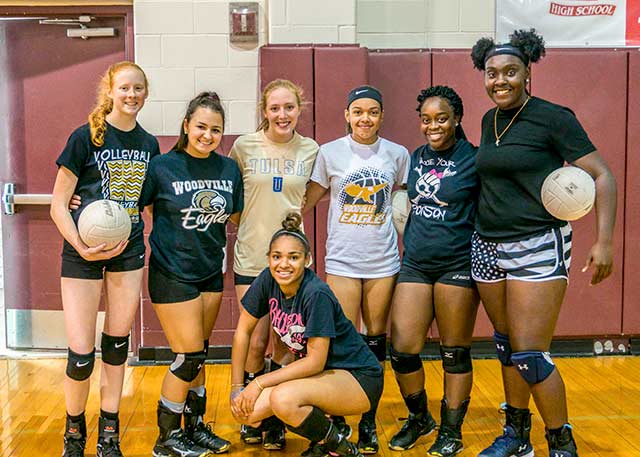 BEAUMONT—Several young women have taken up the cause to compete this spring in a newly formed league for spring volleyball. Teams competing in the league were Beaumont Central, Beaumont Ozen, (who will combine next year to create the new Beaumont United), Westbrook, Beaumont Kelly, Beaumont Legacy, Evadale, and Woodville.

"They get time on the court together in a more relaxed and fun atmosphere while they get to know one another and how they play as a group. The UIL prohibits us from working with the girls until August, but this gives them a huge opportunity to hone their skills on their own before the school season starts."

"I am excited to see how my varsity will begin to take shape into and I also have a unique opportunity to sit back and watch and evaluate younger players who may be able to contribute on the varsity level."

"It's good to see them get their hands on the ball. I was happy to see them come together as a team. I was excited to see how well they handled and passed the ball, considering most of them haven't touched a ball since November,"

Foster spoke about the community providing multiple opportunity for high school girls to get their hands on a volleyball.

"We made the spring league available for them during May, and then we are hosting a volleyball camp for young girls that the high school girls will be teaching from June 4-7. TC Thunder is also hosting a volleyball camp June 26-29 that Luciana Babin is heavily involved with. The final opportunity comes in late July which is the summer league that will be played in Lumberton right before two-a-days start for us. So, there's lots of opportunity for our girls to begin two-a-days ahead of the curve."

Foster was asked what she expected of the girls attending two-a-days in August.

"Across the board, I hope for improvement. I believe there's room for everyone to improve their game regardless of skill or talent level," Foster said. "We really do have a big chance to go far this year and I hope these girls take advantage of the opportunities in front of them."

Changes in the district and changes to the playoff bracket will give Woodville an unprecedented opportunity to make a very deep playoff run this year, the coach added.

"With six seniors and several juniors who are familiar with my game plan, We are planning on speeding up that offense this year to make it more difficult for defenses to adjust to what we do schematically," Foster said.

"I expect (the seniors) to be ready to lead, ready to play, ready to work hard and be in the shape that they know they need to be in to compete," she said. "I have very high expectations from the senior group, but at the same time I've gotten to know them, and they are great kids. I believe they won't let me down."

Conditioning and ball handling skills are important for underclassmen.

"Get your hands on the ball. Don't wait, and work during the summer months to be in shape. Don't wait for two-a-days to get you in shape or you'll be behind."

It's evident that the bar is being raised and participating in these leagues and camps are sure to give opportunity and exposure to the girls to improve their skills in the offseason and summer months.