By Valerie Reddell
This email address is being protected from spambots. You need JavaScript enabled to view it. 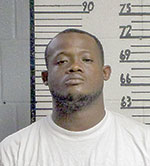 Oshea Jamal WootenPolice in Woodville and Bridge City are searching for a man wanted in connection with the theft of a generator from its owner in Bridge City, as well as several shoplifting incidents at the Woodville Walmart store.

Responding officers were unable to locate the man that Walmart employees believe took merchandise without paying, according to Capt. Mike McCulley of WPD, but they did find his truck in the parking lot.

In the back of that truck, police found a generator that was reported stolen in Bridge City.
"He's been stealing from Walmart for quite a while," McCulley said. "They've been trying to identify him. Next time we expect to see a success."

Locating the vehicle may be the next best thing, however.

By accessing ownership information through a statewide database, McCulley believes they have a name and address to match with the store video. Bridge City Police have visited the residence several times and WPD is keeping an eye on a location outside the city limits where the suspect frequently visits another person whom local police know well.

A Woodville man who had been employed at a Silsbee car dealership was arrested March 20 on a felony theft charge in connection with the disappearance of a $45,000 car from the lot on the day the man was terminated.

Oshea Jamal Wooten, 22, of Woodville, was arrested after Silsbee police obtained a warrant for his arrest on a charge of theft of property $30,000 to $150,000. Woodville police also filed misdemeanor charge of failure to maintain financial responsibility, speeding and failure to appear when they took Wooten into custody.

Wooten managed to acquire a set of keys from the dealership and drove off in a vehicle.

"During inventory, they found out it was missing," Scroggins, a former Woodville Police Officer, said Tuesday.

That inventory was performed Feb. 7.

Police were sent to the suspect's Tyler County residence where an officer saw him walking away from the truck. Woodville police recovered the vehicle, which Scroggins said suffered about $5,000 in damage during the time Wooten had it.

In the meantime, Scroggins said he received multiple tips that the suspect in the theft had also been involved in a drive-by shooting SPD was investigating.

"I'm not sure what that was about," Scroggins said. "I just arrested a suspect in the shooting, and it's not him."

Scroggins said that incident left two people with minor injuries. One spent a couple of days in the hospital with woods to the buttocks and side.

"They will be fine," Scroggins said.

The arrest comes after Scroggins said he has spent approximately a month trying to locate witnesses.