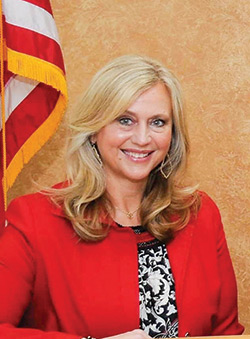 WARREN - At its regular meeting on Tuesday, May 28, the Warren ISD Board of Trustees voted unanimously to name Tammy Boyette as the lone finalist for the position of district superintendent.

Boyette will begin her role as superintendent following a 21-day waiting period, required by the Texas Education Agency. At the meeting, members of the board expressed excitement to have Boyette named as the lone finalist. Assistant Superintendent Mike Paddie said the district will host a welcoming reception for Boyette at a date in June.

Paddie also spoke on behalf of Warren ISD to thank outgoing superintendent Brad McEachern for his six years of service to the district. In February, McEachern was named lone finalist to fill the superintendent position at Hardin-Jefferson ISD.

Prior to being chosen to lead Warren ISD, Boyette served as the chief academic officer of Stafford Municipal Schools District in Stafford, where she served for three years. Stafford MSD recently received an A- rating from TEA under its letter grade system of accountability. Before that, she opened Ridge Point High School in Fort Bend ISD, where she worked as principal for six years. Under her leadership, Ridge Point became known as one of the top schools in Texas.

Boyette has also served as an administrator at Gentry Junior High School in Goose Creek CISD. She has worked in a variety of settings throughout her career as an educator, including rural, urban and suburban schools, ranging in size from class 3A to 6A with students from all cultural and socioeconomic backgrounds, according to Paddie.

She holds degrees from Southeastern Oklahoma State University, where she received a bachelor of science and from the University of Houston, where she earned her masters degree in education. She is on track to receive her doctorate this summer from UH.