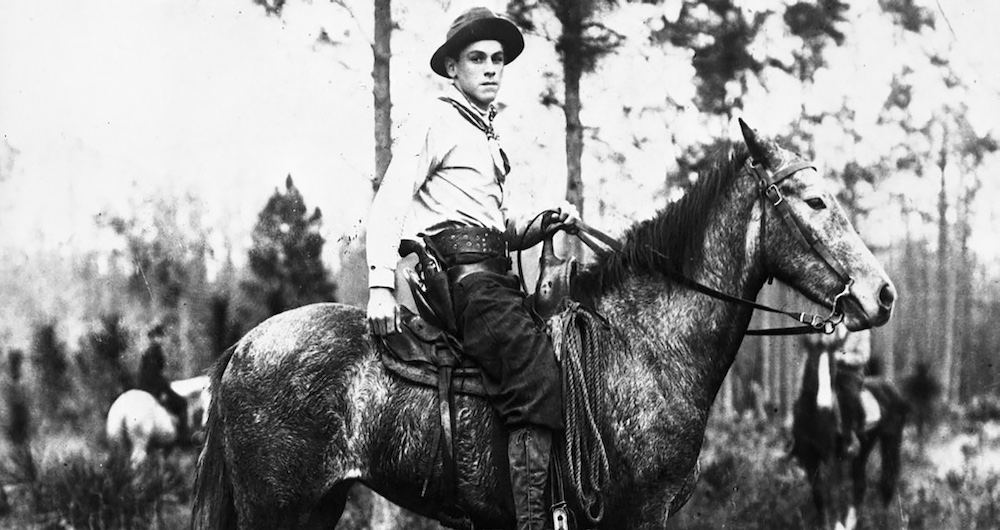 (Photo ca. 1910 State Archives of Florida, Florida Memory)The famous cattle drives of the Texas plains were a continuation of the culture developed in the Pine Barrens of east Texas and the southern United States. European, African, Indian, and Mexican influences produced the quintessential American cowboy.

We finish our series on the “Old Beef Trail” through Tyler County with a few final observations: the all-important historical “so what?” Over the last three years, the Tyler County Heritage and the Tyler County Historical Commission searched for a trail that has only been vaguely mentioned in local lore, and virtually ignored in state archival records.

Initially an Indian path, the Coushatta Trace later became a road to move cattle to Louisiana and eastern markets. Starting with a historical marker at the Mount Hope Methodist Church, the joint team of volunteers collected local stories, analyzed hundreds of maps, land grants and surveys, pored over commissioner court minutes, and walked miles of timber ridges in search of the telltale swales – the evidence of an old trail. The result: We have specifically traced an important (yet neglected) road in Texas and American history. The research would not have been possible without the extensive Texas General Land Office historical data, author Gary Pinkerton, The History Center in Diboll and the Heritage Village’s Whitmeyer Library – a treasure trove of local history. What have we discovered? We believe William Jordan strategically placed his ferry in northeastern Tyler County to purposely avoid the original Neches crossing at Fort Teran. The road that bears his name may have started as early as 1831 in response to the presence of the Mexican garrison. The Tyler County “cut off” avoided the soldiers and it significantly shortened the distance between the Texas cattle-rich marshes and Louisiana.

The road was essential for trade between Mexico-controlled Texas and goods (albeit illegal) from the United States. In order to support the national Mexican economy, Texas residents were forbidden to purchase nearby, cheaper American goods – hence the sometimes-used moniker - “Contraband Trail.” Therefore, the original Coushatta Trace, along with the Jordan Ferry modification, became a major corridor through southeast Texas. Secondly, the Beef Trail was not just important for Tyler County history, but also to Texas settlement and later American expansion. The road was used by westward bound pioneers who settled not just in Tyler County (as in the case of its most famous son John Henry Kirby), but throughout Texas to included Austin’s famous colony on the Brazos. Being included in Austin’s original “Old Three Hundred” is akin to a descendent to one of the pilgrims aboard the Mayflower. Later, the road along the pine ridge (much like author Gary Pinkerton’s description) offered a seasonal, drier route to move cattle to stockyards in Alexandria and New Orleans and thus an additional objective has been to illustrate the East Texas cattle trade.

The more well-known cowboy culture and mythology of the western plains (post-Civil War) was simply a continuation of the pine barrens cattle drover (pre-Civil War). Herding techniques from Europe, the Colonial South and Africa later merged with Indian and Mexican practices resulting in a truly “Texian’’ culture. The Beef Trail, with Tyler County squarely in the middle, was so well known by the time of the Civil War, both Confederate and Union military planners eyed it as a possible avenue into rebel-held Texas. In fact, during reconstruction, the occupying Federal army led by General George Custer unsurprisingly used it to travel from Alexandria to his new headquarters in Austin. Our fourth observation includes a remarkable preservation of the road. Unlike other Texas roads, much of the Beef Trail has survived urban sprawl and modern development. Northern Tyler County remains physically unchanged over the last two centuries with the notable exception of course of the removal of the old growth timber. It is as if General Custer viewed the Pine Barrens from one of the 400-foot vistas along the road and said, “This is beautiful country, keep it the way it is and I will be back” and of course he never returned from the bloody grasslands of Little Big Horn, but the topography mostly has stayed the same. Today, the old trail swales are within feet of their documented location on centuries-old maps and surveys.

A highly valuable map by German immigrant Charles Pressler, known for his Texas maps starting in the late 1840s. Note the “old” Zavala on the Angelina River and while most mapmakers simply drew a line between Mount Hope (west) and Jordan’s Ferry (east), the joint team of historians added granularity and detail to the Tyler County route.

While modern roads not surprisingly follow old pathways, portions of the original road in Tyler County remain unpaved and at times clearly visible. In several cases, after finding a road “hit” from an old document, and using google earth to plot the coordinate, the team could walk to the grid using a handheld GPS and see the road. Admittedly, due to some sections being on private land, we have not been able to map the entire road through Tyler County. However, in the future, we hope landowners along the route will embrace the historical significance of the trail and preserve it. Much like a “best management practice” used by foresters to protect vital watersheds and historical structures, we encourage timber companies and landowners to set aside and protect these Beef Trail swales as much as possible.

Finally, Tyler County has a shared Beef Trail history with the counties to the east and west (and we have been able to collaborate with Polk, Jasper and Newton counties), but more could be accomplished from a regional and state perspective to highlight this important route. As a reminder, the Heritage Village Society seeks to preserve our unique multi-cultural history through the Whitmeyer Library and the Heritage Village Museum. To sustain our educational and storytelling efforts like the Beef Trail research, please support the museum through either monetary donations or serving as a docent or as a volunteer. Please contact the heritage Village for more information at (409) 283-2272.