Photo by Kim Fritzemeier | In a scene reminiscent of the mid 1800’s – one visible from the front porch of the Peter Cauble house, columns of Texas longhorns are herded along a sandy road much like the Tyler County Beef Trail.

The first Texas Tycoon, John Henry Kirby, known as the “Prince of the Pines” thoroughly embraced his pioneer upbringing in Tyler County and his family’s arrival via oxen-drawn wagon. After crossing the Neches River at Jordan’s Ferry in the northeastern portion of the county, the Kirby family traveled along the Old Beef Trail or the Jordan Ferry Road, as it was sometimes known, to their eventual homestead near Peachtree Village.

After arriving in 1850, they followed a procession of settlers, some who stayed in Tyler County, and others who continued 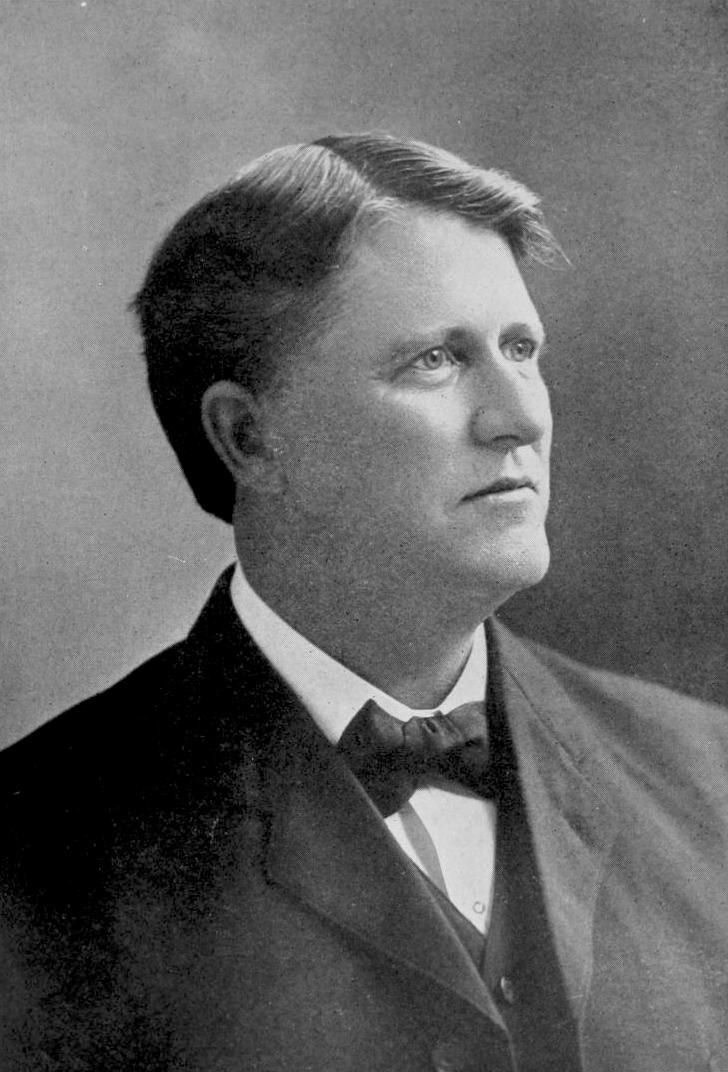 John Henry Kirby, the “Prince of the Pines” (Photo used by Creative Commons license)westward. As an influential titan of the timber trade, it is somewhat fitting and yet ironic his family traveled on a road he would later help eliminate.

During the latter half of the 1800s, his lumber and railroad empire would make rutted, serpentine and bumpy roads like the Beef Trail obsolete. In previous articles, we have mapped the eastern half of the route between Jordan’s Ferry and Billums Creek. To recap, the road paralleled the Neches until it climbed a north-south ridge chain of hills near the future town of Rockland. After traveling south avoiding numerous waterways and sloughs, the Kirby’s like others before them, veered west near the Sand Hill community and followed the narrow ridge down into the Billums Creek bottom. Flowing north makes Billums unique for a Texas waterway as most tributaries run south to the Gulf of Mexico. Geographically the Billums crossing served as a midway point for travel through Tyler County, and during the mid-1800s, it delineated road maintenance responsibilities by the commissioner’s court. Here we include our final documentation of this important Texas road in Tyler County. After climbing out of the Billums watershed, the Beef Trail continued westward until it entered the nearby James Calk land grant. A historically significant headright awarded during the Texas Republic.

Twenty-eight-year-old James Calk joined Colonel Fannin’s famed (and later doomed) regiment and was killed January 6, 1836 in Velasco. A member of the battalion that marched from Macon, GA, he was one of their first casualties. Just a few days later, the iconic, Georgia-produced Texas Lone Star flag was raised for the first time, and a few months later, Fannin and many of the Georgia volunteers were massacred at Goliad. After the war, Calk’s sister and heir, Sarah (later married to a Julius Younse) was entitled to the Texas veteran’s one-third league of land (1476 acres). Why the Calk headright grant was in Tyler County, and how Calk (and why just him) was killed remain a mystery, but it establishes a remarkable linkage to a fallen soldier during the earliest phase of Texas Independence.

For our Beef Trail purposes, this land grant signifies its importance along an east-west route through Tyler County. Later in 1862, Sarah gave her power of attorney to William Mann to sell the property (she was living in Arkansas) and in the field notes, the surveyors clearly include the Jordan Ferry Road. Continuing west, the next Beef Trail “bread crumb” is the “Old Ballard Place” on McGraw Creek. Paired with the James Sturrock homestead, local historian Lou Ella Moseley includes both homes as anchoring the Old Beef Trail. Additionally, the Tyler County Commissioner Court records show Lot (father) and Eli (son) Ballard as road maintainers for the section that “commences at the ford on Billums Creek on the Jordan Ferry and Moscow Road to Peachtree Village…and extends to Williams Seaman’s.” The road eventually merges with the original Coushatta Trace at Seaman’s Prairie. The open area remains a pronounced geographical feature in an area dominated by pines. The black earth grassland dates back to when buffalo would travel into east Texas and today is still easily recognizable. Besides being one of the first families of the county, the Seaman’s were the only ones known locally to herd and drive cattle to market along the Beef Trail. In his seminal research on Texas cattle-producing counties, Terry Jordan’s Trails to Texas: Southern Roots of Western Cattle Ranching includes Seaman’s prairie as the perhaps the only herd in Tyler County. Moseley mentions Tom Seamans driving cattle both ways along the trail and also includes a local gin, an important community resource, on the route. “A gin was built east of the home [Seaman’s] on the Beef Trail which led beyond Moscow.” Here the Belt’s Ferry Road leading southwest from Fort Teran joined with the Jordan Ferry “cut-off” and then traveled along what is now FM1745. This important crossroads featured prominently in the Tyler County Commissioners’ Court minutes and served as an important regional intersection. These roads merged westward as one and crossed Russell Creek ford near the Mount Hope Methodist Church. The nearby and still visible “Wishing Rocks” swales are the next stop as the road heads toward the historic Peter Cauble House. 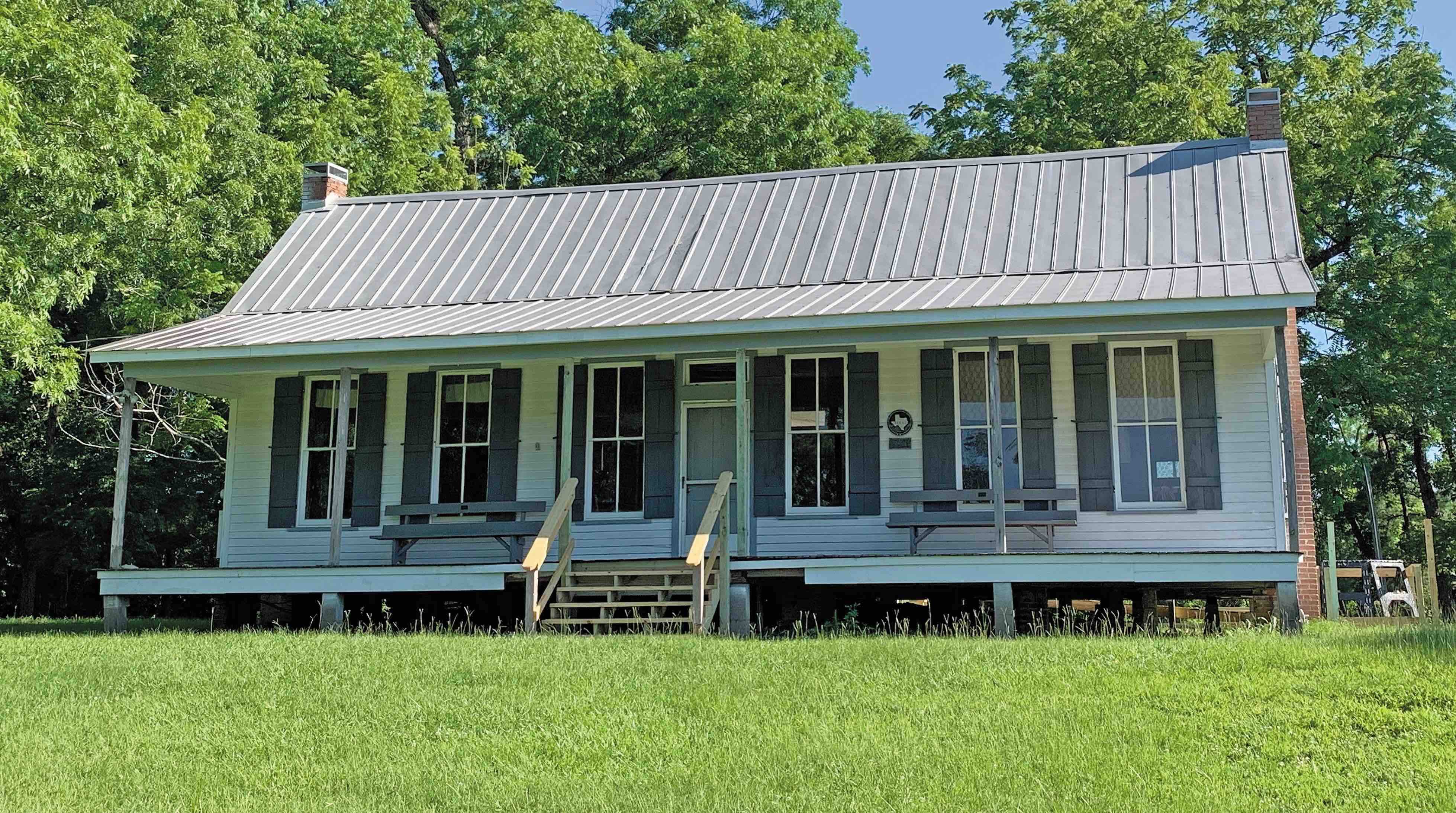 A veteran of the war for Texas independence, irascible and a larger than life figure, the fiercely independent Cauble interestingly enough did not escape the county-mandated obligation to maintain the road that passed his house. He and his family were regularly assigned to oversee and repair a trail that would pass his eventual gravesite. The dogtrot house with the Beef Trail-facing porch once used to hail travelers about news of San Jacinto is still standing and maintained by the Heritage Village Society. It served as a major milestone as the Beef Trail passed through Peachtree Village along the timbered ridge into Polk County and on to the Brazos Valley.