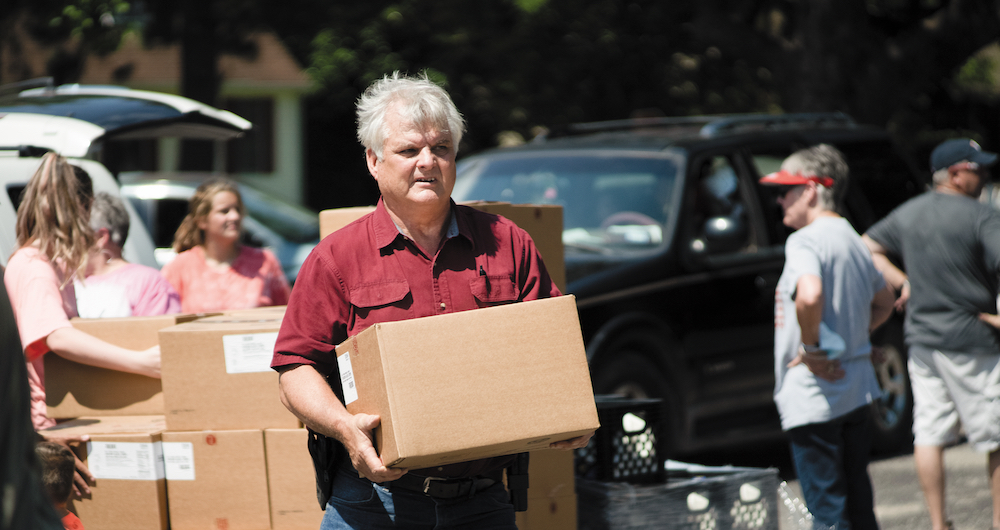 CALEB FORTENBERRY | TCB Scott Yosko, retired Woodville Chief of Police, helps out with Caring is Sharing’s food distribution effort last week. Yosko, a tireless volunteer in the community, has volunteered with the program for almost 30 years.

Caleb Fortenberry
This email address is being protected from spambots. You need JavaScript enabled to view it.

WOODVILLE – Friday, at approximately 10:00 a.m., Caring is Sharing volunteers, in conjunction with South East Texas Food Bank distributed food to over 300 families in the parking lot of the Woodville First Baptist Church.

Vehicles crowded the roads around the church. Woodville Police Department responded to help direct the large line of vehicles waiting to receive food.
Each vehicle was given 30 pounds of fajita meat, milk, fresh produce, and a box of canned vegetables.

The food drive was made possible by the South East Texas Food Bank through a USDA project. Farmers and anonymous donors gave the produce for the function, said CIS board member Gary McRight.

In Conroe the South East Texas Food Bank was having difficulty finding somewhere to donate their produce. Conroe Police Dept. Officer Jimmy Waller, former Woodville Police Dept. Officer, told the food bank about Caring is Sharing and reached out to Tyler County Deputy Ricky Coker to help make the arrangements for the drive.

“We were the only agency within 200 miles that were able to connect with them,” said McRight. “The closest town that’s a part of this right now is Willis-Spring Texas. That’s how far out we are from the regular distribution group, but they included us… Accidents don’t happen.”

Retired Woodville Chief of Police Scott Yosko provided transport of the food to the residents in Tyler County who were unable to drive to the location of the event. “They just need some help. They may have 50 dollars left over after they pay their rent and they just really need some help,” said Yosko, who has been a volunteer for the CIS program for almost 30 years.

There were several volunteers for the event. “We’re thrilled that we could partner with South East Texas Food Bank and have an incredible team of volunteers out here that have worked very hard this morning to meet needs in our community,” said CIS board member Ashley Spurlock.

While CIS does accept donations of goods, the amounts of food can be larger through monetary donations. "The donations from this area has saved Caring is Sharing, and honestly the monetary donations are so much more valuable,” McRight explained. “We can buy the food at Beaumont for 16 cents a pound.”

The Woodville CIS location will be receiving a refrigeration unit provided by the South East Texas Food Bank from Beaumont, Texas, through various donations. The new unit will enable them to maintain foods for longer periods of time. McRight stated that the unit will hold produce, milk, and meat.

CIS is open to the public Monday, Wednesday and Friday from 9:00 a.m. - 11:00 a.m., located on 308 Beaver St. in Woodville. To find out how you can get involved with this organization, visit www.setxfoodbank.org.