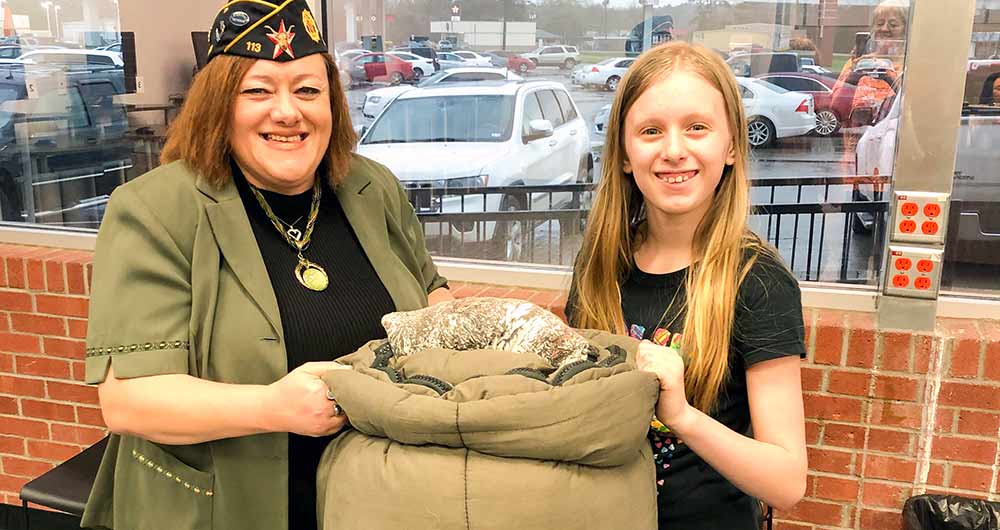 Michelle Scuito, Veterans Career Adivsor for the VA and Sergeant-at-Arms of the American Legion, Lufkin Post #113, accepts a clothing donation from Elysabeth Bryan.

She is, as her great aunt Susan Mingle says, a bit shy, but when one gets her talking about one of her favorite subjects, like video games, she comes to life and will rattle off specifics of certain gaming systems as well as the intricate details of her favorite games.

She has a grasp of details and a drive to learn new things that comes across as uncanny for someone of her age, and that drive leads her into directions that could serve as an inspiration for folks much older than her.

Before last Christmas, she saw a need that she felt she could help fulfill. It all began with something she noticed when she accompanied her great uncle on a VA appointment. She saw a cardboard fort of housing for the homeless, and among the makeshift shelters was a box of clothing.

“I just saw it and I thought ‘We should help the homeless veterans,’” she said.

Mingle noted that it bothered the socially conscious youngster. “That triggered the idea,” she said. “She likes doing and giving.”

Bryan was able to put a large box for donations inside the Texas Star Cafe in Colmesneil. Mingle noted that the box is almost as tall as Bryan and was full of donations not long after it was placed.

Bryan said they’ve personally distributed the clothing to those who need it. She recently made a donation of clothing and warm winter items to Michelle Scuito, the Sergeant-at-Arms for American Legion Post #113 in Lufkin and Career Adviser for the Lufkin VA.

“It’s really sweet how, out of the blue, she’ll come up with something,” Mingle said. “I help coordinate things, but it’s all her ideas she comes up with.”

“If it’s something that could help the world, I’ll just do it,” Bryan said. She equated the ability and desire to help others to “being like serving God.”

The clothing donations are not the first, or certainly the last, way the bright-eyed girl aims to better the world around her. Two years ago she put her craft skills to work and made bracelets from rubber bands, which she and a friend sold in order to raise money for St. Jude’s Children’s Hospital.

She said she hopes to begin gathering stuffed animals (some from her own collection) to donate to law enforcement in order to give to children as comfort for those who have been involved in a wreck or have been removed from their parents.

Her extracurricular activities also point in the direction of service to others. She has participated in Girl Scouts and her church youth group in Bible drill activities. Additionally, she said “I have a gaming addiction,” but her knowledge of video games and their respective platforms is impressive enough to floor many gaming enthusiasts twice her age.

She rapidly rattled off a list of games she enjoys playing, including the popular “Minecraft”. Reading and music are also interests of hers. Her passion for technology has parlayed itself into another way to help out, as she is the tech helper in her class.

The problem of homelessness among veterans of the armed forces, according to figures from the Department of Veterans Affairs, is in decline, but still an issue facing many veterans.

The most recent numbers, from January 2018, show that more than 37,800 veterans were experiencing homelessness on a single night, with more than 23,300 of them unsheltered or living on the street.

The VA has made it a priority of ending homelessness among veterans, but the work of kindhearted volunteers go a long way to helping out.

To paraphrase a quote attributed to Mahatma Gandhi, the idea of changing oneself brings about the tendencies in the world to also change. “As a man changes his own nature, so does the attitude of the world…toward him…We need not wait to see what others do,” the quote reads. At her young age, Elysabeth Bryan realizes this; to be the change she wants to see. Her drive and willingness to serve and help wherever she can is something that Mingle said the adults have noticed and supported even more than her peer group has.