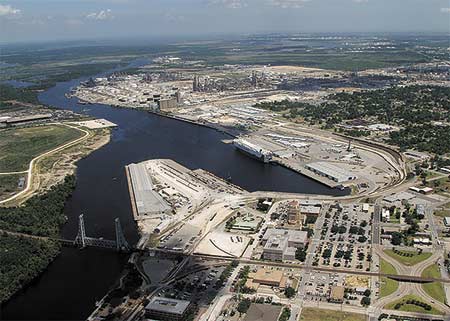 Port of Beaumont is another route for area logging products.by Kelli Barnes

A lot of ink is being used, discussing log trucks on the highways of Texas, but there are additional methods of transporting logs, including railways and waterways.

The Port of Beaumont, located in southeast Texas, is shipping wood pulp in bales, wood pulp in rolls, linerboard, lumber, plywood and hardboard out of Texas to destinations around the world.
Historical records indicate the 51st Texas Legislature created the Port of Beaumont in 1949 as a political body and governmental entity of the State of Texas. Since its creation as a governmental entity, the port has steadily expanded and improved its facilities and is considered a major partner in worldwide commerce.

Its actual history as a deep-water port dates back to 1908, when a canal, nine feet deep, was dug in the Neches River from Beaumont to the Port Arthur ship channel. In 1916, the channel was deepened to 25 feet and a turning basin was scooped out in the bend of the river. The port channel was deepened to 30 feet in 1922, increasing Beaumont's importance as a shipping center. In the 1940s, the port reached its current depth of 40 feet. Local businessmen developed dock facilities on the waterfront during that same time period. Today, the Port of Beaumont Navigation District covers an area of about 150 square miles, including the City of Beaumont.

Texas is one of the largest maritime states in the nation and the number one exporter nationwide. Waterways and ports provide more than 200,000 jobs statewide and contribute $34 billion to the Texas economy. Though these numbers are impressive, much of the potential benefit of Texas ports and waterways has gone untapped. In October 2013, the U.S. House of Representatives passed, by an overwhelming majority vote, the Water Resources Reform and Development Act (WRRDA) outlining the way the U.S. improves and maintains vital ports and waterways. The bill authorizes construction of the proposed Sabine-Neches Waterway channel improvement project, which will deepen the waterway again, from 40 feet to 48 feet to accommodate larger ships that will be traveling through the Panama Canal.

For more information about utilizing the Port of Beaumont contact John Roby (409) 656-7327 or email This email address is being protected from spambots. You need JavaScript enabled to view it..